Although palindromes have been around for a very long time — dating back to magic squares — they’ve gained additional prominence in recent years. The 2017 World Palindrome Championship was determined alongside the American Crossword Puzzle Tournament the same year. They have their own awards ceremony: The SymmyS Awards. There was even a documentary on the subject.

Palindrome creation was a popular pastime in Bletchley Park during the off-time of the codebreakers and staff. And those palindromic magic squares we referenced earlier? It was once believed that they held magical properties and served as incantations to ward off threats both spiritual and physical.

Musician, parodist, and wordsmith “Weird Al” Yankovic, no stranger to palindromes himself, once said that “the writing of a brilliant palindrome is a small miracle, and that, I think, deserves to be honored more than a lot of the stupid and inconsequential things we often celebrate in our culture.”

But why do I have palindromes on the brain today? Because I’ve been trying to figure out which one is the best one ever created.

It’s a tricky topic, extremely subjective. What parameters do I use to choose the palindrome in the top spot?

I prefer the latter. It’s not just thematically appropriate to its subject, but it’s also a univocalic, a sentence using only one vowel. There’s a lot of linguistic legerdemain going on here.

It has been expanded upon, of course. I’ve seen this wordier version around:

Do I go by sheer length? Some palindromes are incredibly long, but are mostly nonsense.

My friend Troy recently shared this lengthy palindrome with me:

It makes more sense than the Panama one, but just barely. It’s a thinly disguised list, that’s all.

So, is narrative coherence a necessity for the best palindrome ever?

World Champion Palindromist Mark Saltveit claims that his first palindrome was “Resoled in Saratoga, riveting in a wide wale suit, I use law, Ed. I, wan, ignite virago, tar a snide loser.”

It’s lengthy, and it mostly makes sense. But Saltveit rarely worries about that. One of his most famous creations is this borderline nonsensical concoction:

Sure, it manages to use Xs and a Z, but it’s gibberish. I much prefer his winner from the First World Palindrome Championship in 2012:

The Bletchley Park palindromists demanded some level of coherence. One of the most impressive produced there was “Doc, note, I dissent. A fast never prevents a fatness. I diet on cod.”

It’s certainly impressive, and feels like it could be spoken casually.

Maybe the ideal palindrome walks the tightrope of cleverness, innovation, length, and coherence.

Although it’s quite short, I do enjoy this existential one from the 2018 SymmyS Awards: “Am I man-made? Damn! Am I, Ma?”

I’ve pored over dozens and dozens of palindromes, trying to find one that best represents the wordplay and the art form. And I’ve made my choice.

In my humble, puzzly opinion as a self-appointed adjudicator of palindromic magnificence, I choose Anthony Etherin’s “The Failed Cartographer” as the best palindrome I’ve ever seen.

Demand a hill, at solid nadir…. Damn it! One morn I saw I was in Rome,
not in Madrid, and I lost all I had named…

Can you think of a palindrome that better epitomizes the genre? Please share in the comments section below. We’d love to hear from you!

Oh, and as for my favorite palindrome? That’s easy. It’s a stupid one I wrote for a friend.

“My friend Sean has a really weird last name: Emantsaldriewyllaerasahnaesdnierfym.” 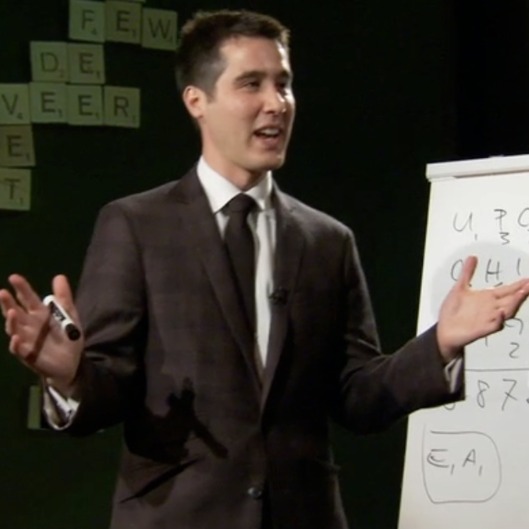 There is a certain sense of wonder that accompanies a well-constructed puzzle. The skill and artistry it takes to craft a quality crossword or brain teaser, weaving together words and leaving a finished puzzle in your wake, rather than a bundle of crosswordese and obscurities is truly something remarkable.

But that’s not the sort of puzzle magic we’re discussing today. No, instead, we’re returning to the CW summer series Penn and Teller: Fool Us to observe the magic of another puzzly entertainer at work.

For the uninitiated, Fool Us is a show where magicians and performers from all around the world present their best tricks, illusions, and bits of magical wizardry to try and stump the famous duo.

Check out this video where he dazzles Penn and Teller:

That final reveal was a thing of beauty!

You can check out more of John Michael Hinton’s magic on his YouTube page! And let me know if you’ve seen any other acts of puzzle magic! I’d love to check them out!