[Image courtesy of The Challenge Wiki.]

At this point in the game, the UK team had lost two players already (as one was sent home at the end of the previous episode, and another left the show for personal reasons).

In last week’s episode, as the two teams arrived at a secluded lakeside area, there was a puzzly surprise waiting for them: Cryptic Crossbow.

Each team had a giant crossbow, a grid with four four-letter words on it (as well as spaces for additional letters), and a platform from which to jump into the water.

Eight competitors from each team had to swim out into the water and collect wooden tiles with letters on them. (One letter per tile, one tile per swimmer.) Once eight letters had been retrieved, a second wave of swimmers could jump into the water to retrieve the other eight tiles in the water.

Both teams strategized ahead of time.

CT, the Challenge veteran on the UK team, urged his team to simply place all of the letters on the grid as quickly as possible, so they could launch their crossbow-loaded teammate into the water to retrieve the cryptex.

CT noted that the grid didn’t need to be correct for them to win — opening the cryptex was how a team achieved victory — so the grid didn’t matter, so long as they could mentally solve the puzzle and come up with the correct code word for the cryptex.

On the US side, Laurel pushed her teammates to solve the puzzle before their teammate was launched from the crossbow (to ensure they’d be able to open the cryptex on the first try), but Johnny Bananas had the same instincts as CT and pushed the idea of loading the grid quickly in order to launch their teammate and retrieve the cryptex.

Once the battle plans were in place, the teams then determined who would swim to which letters (in order to use their best swimmers to travel the farthest distance the fastest).

As a puzzler, after one glance at the grid, I immediately tried to figure out the possible eight-letter answers in my head. Naturally. AQUA was the easiest, because SEAQUAKE was the only relatively common word that fit.

Though UK competitor Georgia obviously disagreed with me, as she was certain EVACUATE would fit. 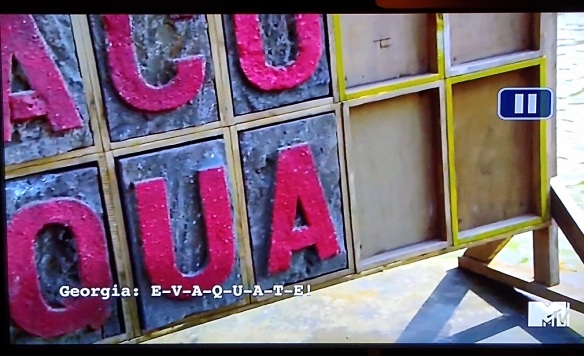 Similarly, HIJACKED was the only common word that would fit for JACK.

TACO was harder, because it took me a while to come up with CATACOMB as the answer. It’s a cool word, but not one that jumped out at me.

LORD was the most challenging, because SLUMLORD, OVERLORD, LANDLORD, and DRUGLORD all came to mind, although some seemed less likely due to unpleasant connotations. (Not only that, but my nerdy brain kept suggesting possibilities like TIMELORD, STARLORD, DARKLORD, HIGHLORD, STALLORD, etc.) 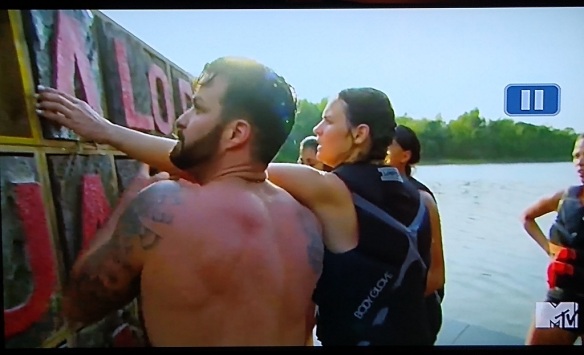 With stronger swimmers on their side, the US team retrieved all of their letters before the UK team did, and according to plan, they simply filled the grid randomly in order to trigger their catapult, launching teammate Jordan into the water and toward the cryptex. They then began mentally reworking the grid to solve the puzzle.

(We couldn’t see all of the available letters, but teammate Paulie correctly determined that the top word was, in fact, OVERLORD.)

The UK side, on the other hand, struggled to get all 16 letters back to their grid in a timely fashion, and then compounded this mistake by trying to fill in the grid properly, delaying the launch of their crossbow-loaded teammate.

While they tried to solve the puzzle (and failed), Jordan had already unlocked the US team’s cryptex and started swimming it back to his team’s platform. 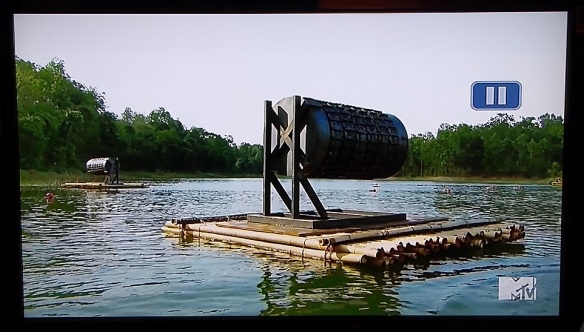 Finally, the UK team listened to CT and just filled the grid in order to launch their teammate Joss into the water, but by this point, Jordan was more than halfway to the US team’s platform with their cryptex.

Joss had barely reached the UK team’s cryptex when the US team unlocked theirs with the code word DEMISE. 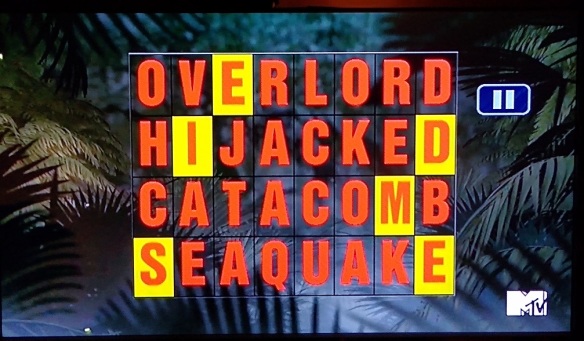 The US team made it two Challenge event wins in a row, and the UK team was sent off to choose one member of their team for possible elimination.

In short, the UK team was decimated in this challenge. They were outswam, outpuzzled, and outstrategized by the US team. Although they were behind at the start due to some of their slower swimmers, they would’ve had a better chance if they’d follow the US team’s lead and just gotten their crossbow teammate into the water sooner while they worked out the puzzle. But alas, it was not meant to be.

If only they had a PuzzleNationer on their team, this could’ve all been avoided.

Although this wasn’t the most difficult puzzle-based event I’ve seen in previous editions of The Challenge, it was a nice variation and certainly kept the competitors on their toes. I look forward to seeing if there are more puzzly obstacles awaiting the two teams as the competition continues.