We’ve covered many interesting and ambitious Kickstarter and Indiegogo campaigns over the years, each with their puzzly goals and aspirations. Some reinvent an old classic, while others forge a new path by creating a unique solving experience.

The subject of today’s post is doing a little of both. Enjoy as we delve into the world of Streets of Steel! 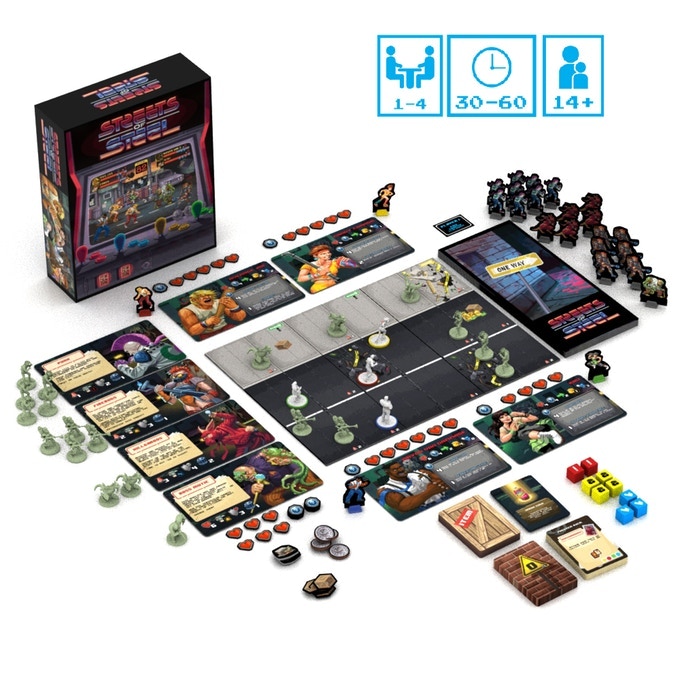 Streets of Steel endeavors to capture the spirit of ’80s 8-bit Nintendo fighting classics like Streets of Rage or River City Ransom, all while creating an engrossing play experience built around cooperative combat.

As a huge fan of games like this (particularly the Double Dragon franchise, which has a similar gameplay style), I was immediately intrigued by the idea of translating the side-scrolling video game experience to the tabletop realm. 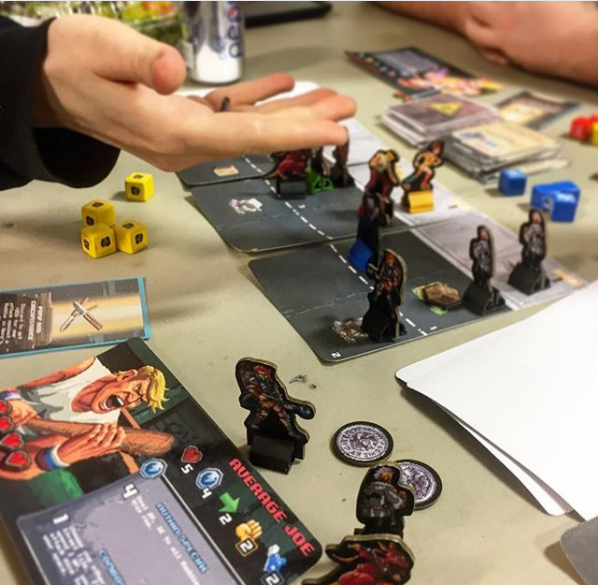 Check out this intro from the Kickstarter page for the game:

Steel City has fallen into disarray. You and your crew must clean up the streets in this 1-4 player SideScrollin Co-Op boardgame

A generation ago, Steel City was a shining beacon of cooperation, peace and prosperity. Neighbors cleaned up after their dogs. Graffiti rarely used offensive language. PTA meeting attendance was high. Then, the Disaster struck. Now, Steel City is a mere shadow of its former glory. Roving bands of thugs terrorize honest citizens. Evil corporations dump toxic waste in the street. PTA meeting attendance is low.

Tired and fed up, a few brave Steel City heroes have banded together to stem the tide of carnage. YOU are one of those heroes. YOU will clean up these STREETS OF STEEL.

LASERS! THE FUTURE IS NOW! Cutting prototype chits for our new game, Streets Of Steel. We will have it with us at PAX Unplugged, prepping for Kickstarter. Come say hi! 👋 #boardgames #tabletop #16bit #arcade #brawler #paxunplugged #bgg

The campaign has already reached its funding goal, and now supporters continue pushing the total higher, reaching several stretch goals that increase the quality of game pieces and add new mechanics to the gameplay itself. (And there’s still time to become a backer!)

Streets Of Steel will hopefully come with both PIXEL characters ~and~ plastic MINIS so people can play their own preference! Sign up to our mailing list to be alerted when Kickstarter goes live. Link in bio. #tabletop #boardgames #kickstarter #pixelart #arcade

I reached out to creator Ryan Lesser, and he was kind enough to answer a few questions about the early development days of Streets of Steel.

When asked about how Streets of Steel came to be:

I was thinking of other ways, besides my first board game High Heavens, to bring a combat-heavy tabletop game experience to non-hardcore gamers. Randomness and dice rolling are both pretty much non existent in High Heavens, so I figured I would go heavy on that.

I also wanted to make a cooperative game, where High Heavens is competitive. Those two goals had my mind crunching, looking for cool gameplay that could support that. Pretty quickly, I thought to bring the beat ’em up video game genre to the tabletop.

When asked how the development process (both in game design and Kickstarter launch) was different from his previous game, the thoroughly enjoyable mythology-fueled player-vs-player game, High Heavens:

In a lot of ways the dev was similar, but specifically, the co-op play was very different. Instead of creating a tight but expandable experience that pits players against each other, every decision that I made for SOS was to bring them together as a team. Every single new idea, move, power, etc that was generated, had to serve the purpose of team play.

I also designed this one, not alone, but with a partner-in-crime. Matt Moore and I have been working together since about 2006, when I hired him as an Artist at Harmonix. Since then, he has become an Art Director himself at other companies but all the while we have both played, and jammed on ideas for board games. This time I formalized things and he came on board to help me finish the game. He spent a large amount of his time on SOS crafting the Baddie Behavior Deck… our AI system that tells the game what to do against the players.

Another big difference is that instead of leaning heavily on ancient mythology, as in High Heavens, I wanted to invent my own, new IP based on all of the inputs I had during the 80s. It was sort of my Weird Science, but instead of trying to make a human, I wanted to make a board game. In SOS, you can see not only my own inventions, but lots of influences from movies, TV, music, comics and of course, video games. 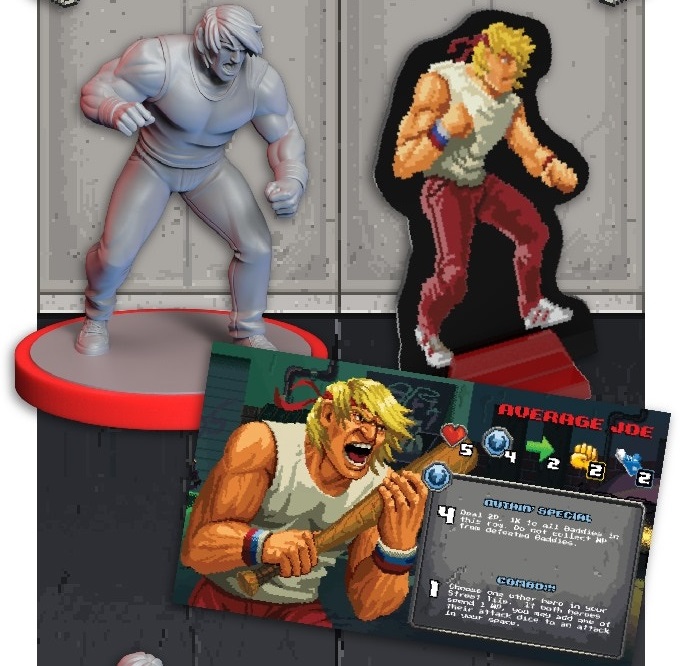 He definitely nailed that aesthetic. Each player controls a different hero, each one a pastiche of fighting game characters and ’80s movie tropes. Average Joe, for instance, definitely wouldn’t have looked out of place as a member of Cobra Kai, or among the Warriors as they battled their way across town. And yet, for video game fans, there’s no denying the resemblance to Ken from Street Fighter. 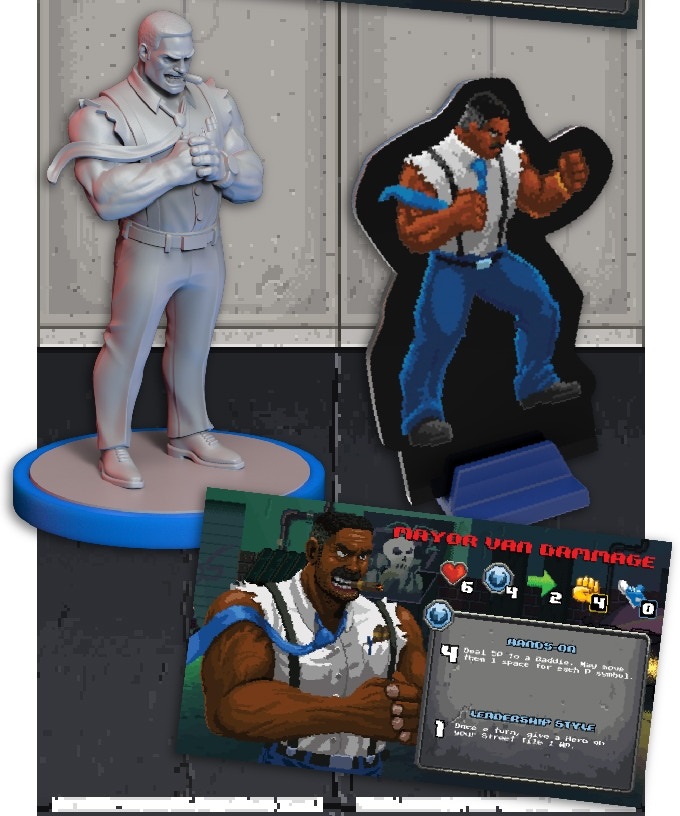 Mayor Van Dammage, on the other hand, is every cop-movie authority figure joke simultaneously. He’s the exasperated police chief, the partner with one day until retirement, and the cigar-chomping rogue cop on a mission, all at once. And with a name strongly reminiscent of one of the hokiest tough guys in film history, every player will find something recognizable with him.

Plus the bad guys are topnotch. Check out this quick Instagram clip of Ryan getting the Boss Mutie’s expression just right (in a ghastly way, of course):

Sculpting the facial expression for the Boss Mutie in our next Kickstarter game STREETS OF STEEL. #kickstarter #boardgames #minis #bgg #tabletop #sculpt #zbrush

As a co-op game, players must work together, combining their skills, wits, and items acquired in the game in order to stop the bad guys and save Steel City. All co-op games rely on strong problem-solving, strategic thinking, and careful resource-management, which just happen to be three skills that puzzlers have in spades.

And I suspect this game will give puzzlers and fighters a challenge well worth their time.

I hope you enjoyed this little glimpse behind the curtain for Streets of Steel. There’s still time to back it on Kickstarter and contribute to the game’s production and success! Click here for all the details!

And be sure to check out their Kickstarter Live broadcast on Friday around 11am EST!

Thank you to Ryan Lesser for not only taking the time out to talk to us, but for opening up the archives to show us some of the development process for the game! Here’s hoping Streets of Steel reaches even greater heights of success before the campaign is through!