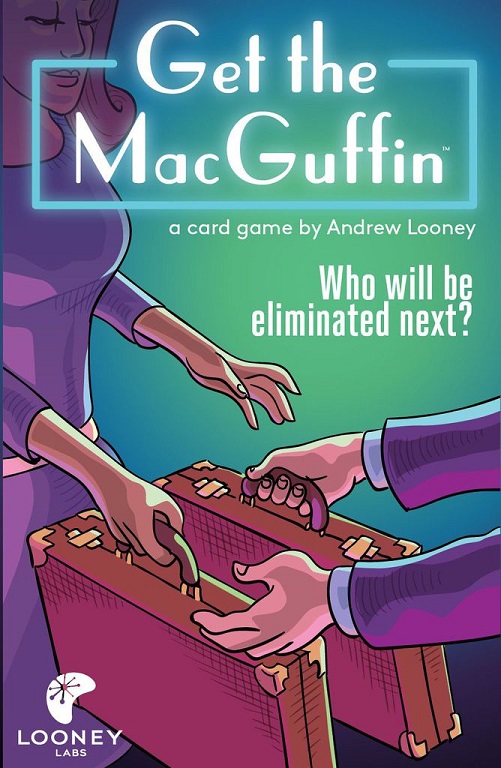 There are all sorts of different card games out there. Some require you to empty your hand of cards before your opponents can. Some are about accumulating the right cards to accomplish certain tasks, reach certain totals, or match certain patterns and images.

Today’s card game is a little different, because it’s not about emptying your hand, accomplishing goals, or matching images… it’s all about outlasting your opponents.

In today’s product review, we explore the latest offering from the crew at Looney Labs: Get the MacGuffin. 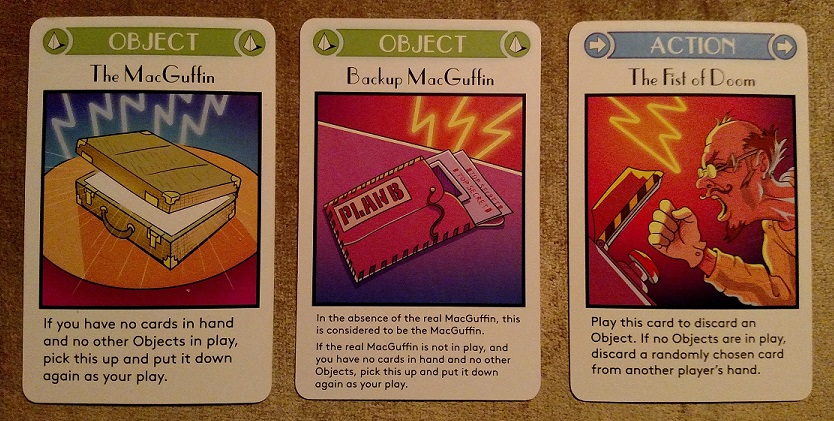 At first glance, this might simply seem like a scaled-down version of Fluxx. You have action cards (which affect how you and other players play the game) and object cards (which are placed down in front of you, like the Keepers and Creepers in Fluxx).

As you might expect from the name of the game, getting the MacGuffin is a worthwhile accomplishment, but it’s not the true endgame here. It’s just one very attractive way to reach the endgame.

Between the action cards and object cards, you’re simply trying to keep cards in your hand or in play in front of you while your opponents whittle down their own meager stashes of cards. If you run of cards, you’re out of the game.

And this happens faster than you’d think. With only 23 cards in the deck — 7 object cards and 16 action cards — you could run out of cards in only a few turns. You see, each player starts with the same number of cards. But there’s a big difference between the minimum number of players (two, which means you each get 5 cards, leaving 13 cards out of play) and the maximum number of players (eleven, which means you each get 2 cards, leaving 1 card out of play). 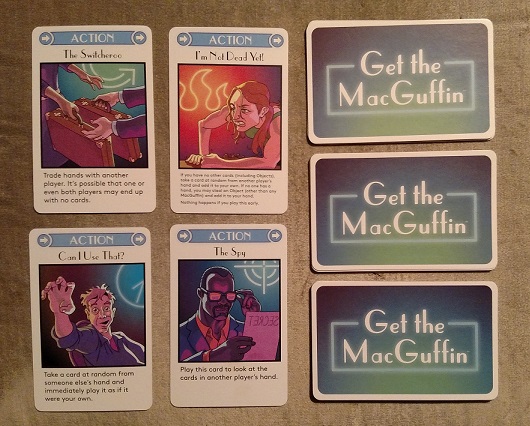 The cards vary wildly in value. Some are very silly; play The Shrugmaster, for instance, and you simply shrug, using up a turn. Otherwise, you don’t affect the game or the other players in any way.

Compare this to a valuable card, like The MacGuffin, which can be picked up and played again over and over. As long as you have that card in play in front of you, you will always have another turn. In a game where every turn can cost you cards, The MacGuffin is a powerful card to wield.

Players familiar with Fluxx will find some of the actions and object card powers familiar, as they allow you to randomly remove cards from other players’ hands, swap cards (or hands) with other players, and even block other cards from being used. 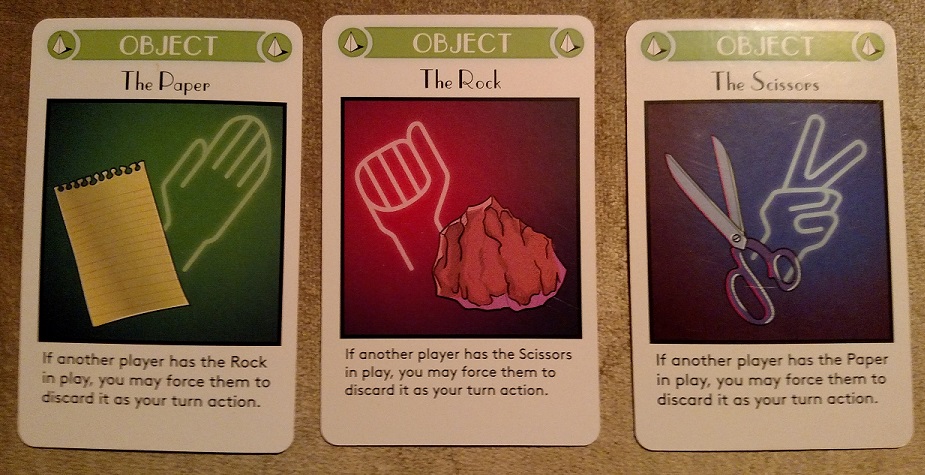 The balance of cards and actions is impeccable. While some cards are very influential, there is always another card in the deck that can remove it, shift it, or neutralize it. (For every MacGuffin, there is not only a Backup MacGuffin, but also a Fist of Doom.)

This adds tons of replay value to a card game that at first blush might seem limited. But the level of card interaction — like the Rock, Paper, and Scissors cards pictured above — make each game an unexpected treat.

Plus it’s a hugely different game based on the number of players. With a big group, you need to be more aggressive, because you could run out of cards in a few minutes. With a smaller group — or just a pairing — you have to strategize more, protecting your valuable cards while trying to prevent your opponents from taking advantage early. Or, heaven forbid, getting the MacGuffin. 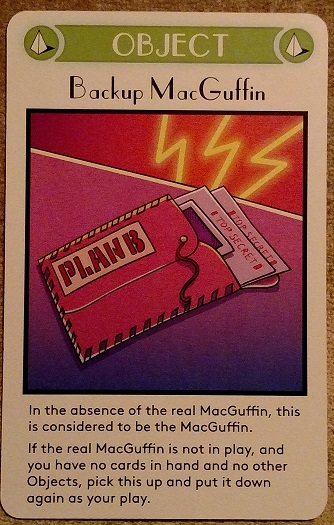 Not only that, but the art on each card is terrific. The random characters on the object cards in particular — everyone from The Merchant and The Spy to The Thief and The Assassin — hint at a larger narrative, a bigger storytelling world that the game seems to only scratch the surface of. They feel like the misfits from a particularly wacky Guy Ritchie heist movie, adding a fun element of whimsy to the often-dastardly proceedings.

Get the MacGuffin is a quick-play game that you’ll want to play over and over again.

[Get the MacGuffin is available from Looney Labs and other participating retailers, starting at just $10!]

[Image courtesy of The Board Game Family.]

So, it’s after Christmas, and you’ve been gifted with a new game, or a roleplaying book, or someone showed you a new card game and you want to know more. Or your New Year’s Resolution is to learn more games, play more games, solve more puzzles, or even make some puzzles yourself.

Basically… how do you get started?

Here. You get started right here. I’m going to run down my favorite guide books for gaming, puzzles, tabletop play, roleplaying, and more, creating the perfect first step to a new world of play for you.

My first recommendation is also the most recently published book on my list.

The Civilized Guide to Tabletop Gaming by Teri Litorco is a perfect introduction to all things gaming. This delightfully nerdy tome is loaded with thoughtful advice covering everything from choosing new games to teaching them to others, as well as building a game group for regular sessions or roleplaying games, and more.

From how to deal with cranky gamers to how to host your own major gaming events, Teri has dealt with every obstacle imaginable, and she offers her hard-won first-hand knowledge in easily digestible tidbits. Even as an experienced tabletop gamer, roleplayer, and puzzler, I found this to be a very worthwhile read, and I think you will too.

If card games are your poison, then what you need is a copy of The Ultimate Book of Card Games by Scott McNeely.

What separates this book from many other card game books — namely the ones attributed to Hoyle (the vast majority of which had nothing to do with him) — is that it doesn’t claim to be the definitive source. It provides the key rules for how to play, and then offers numerous variations and house rules that expand and refine gameplay.

There are more than 80 pages of variations of Solitaire alone! Kids games, betting games, games for two, three, four or more, this is my go-to guide for everything that can be played with a standard deck of cards.

What if you’re already a fan of games, but you want to play them better? If that’s your goal, check out How to Win Games and Beat People by Tom Whipple.

That’s just one of the valuable nuggets of info awaiting you in this book.

Do you have any favorite books about puzzles and games that I missed? Let me know, I’d love to hear about them!