And I’m excited to welcome Grant Howitt as our latest 5 Questions interviewee!

Grant is a prolific tabletop game designer who has created multi-book campaign settings and adventures, but is perhaps best known for his one-page roleplaying games, where he fits an entire game — objectives, setting, characters, rules, and other game details and stylistic flourishes — onto a single piece of paper!

He has built a reputation for clever design, irreverent campaign concepts, and topflight roleplaying experiences, and he’s currently putting all of those creative energies into Heart: The City Beneath, a recent Kickstarter success story.

Grant was gracious enough to take some time out to talk to us, so without further ado, let’s get to the interview!

1. How did you get started with roleplaying games? When did you start designing your own games?

I got into RPGs back in 2000 – I saw a game of Vampire the Masquerade being played, and while I didn’t take part, I kind of fell in love with the possibility of the thing. I come from a wargaming and videogaming background, so the flexibility available to players blew my mind when I saw it done live. I didn’t actually play regularly for another six years, because my high school friends were too cool to do it, and I can’t blame them.

I started making my own games significantly before that. I wrote my first game in high school, a hack of a game called Zaibatsu that I got off an Angelfire website, and it reflects my 14-year-old obsession with marijuana, shooting two guns at once, and generally dicking about. (I still like all of those things but I feel like I’m expressing it in more subtle ways these days.)

I went on to write a Live-Action Roleplaying system called Zombie LARP at University with my friend Chris Taylor, who I now co-own an RPG business with alongside Mary Hamilton. (I’m married to Mary; it’s pretty cool running a business doing the thing you love most with the people you love most.) 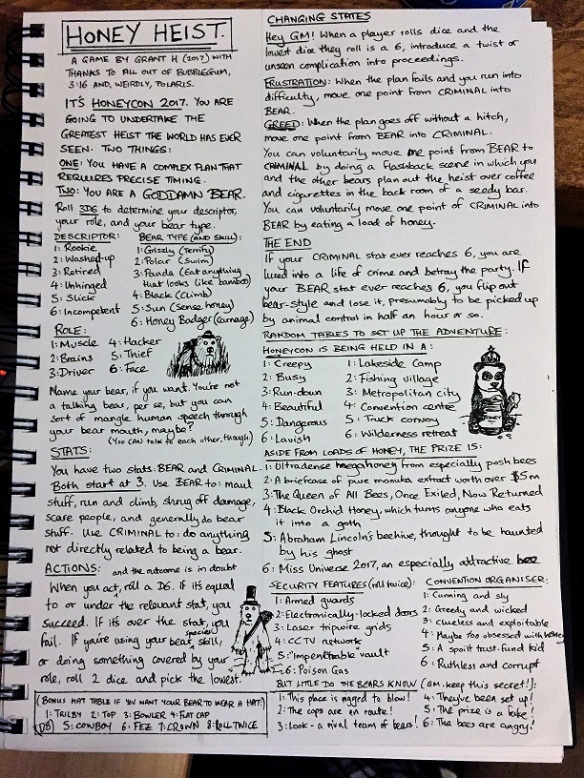 [Have you ever masterminded the world’s greatest heist while being a bear?
That’s the goal of Honey Heist, a one-page roleplaying game created by Howitt.]

2. Your games run the gamut from one-page works like the lighthearted Honey Heist and the tension-filled Wake to more complex and detailed games like One Last Job and Spire.

But one interesting thing aspect of your games is that there’s always an abundance of material to inspire the roleplaying part of the game. When designing the mechanics of a game, how do you find the sweet spot between necessity, efficiency, stylistic flair, and going overboard?

That’s a hell of a question! It’s tricky; you get to learn the feel for it after a while. Chris also reins me in a lot and helps me keep a handle on my excesses; he’s very much the yin to my yang. I think the goal is to make something that’s fun to read and that sparks ideas for adventures in the reader’s head – you’re giving them the keys to a fantasy world and guiding them to their own stories, rather than telling them something directly. So you can get loose with it and stitch things together with a theme rather than worrying about, you know, sentence structure and all that stuff.

3. What are two games that have had a strong influence on your own roleplaying experience, either as a player or a game creator? And what two of your own games would you recommend that people try to widen their own gaming experience?

First off: Dogs in the Vineyard by D Vincent Baker, which is out of print now, but it taught me that games can be about one thing and do it perfectly rather than try to simulate any potential actions within a game world. It taught me a lot about abstraction. It’s hugely clever and one player character always ends up shooting another by the end of a session due to an argument about faith, and that’s extremely my bag.

Secondly: Wushu, by Dan Bayn, which is geared towards daft high-action explosive schlocky pulp play, but the system is so monumentally clever because it barely exists. The fascinating thing about Wushu is that it says “yes, you can do that” where most other games say “no, you can’t do that yet” which means that, after about three sessions, you end up burned out because no-one’s keeping you at arm’s length from your potential. I love it. It’s roleplaying cocaine.

And from myself? I think people should buy the most expensive ones, because I need a new pair of boots. (Actually? Read GENIUS LOCI which is about playing a cannibalistic post office god in 1960’s rural Southern England, because it’s not like anything else I’ve read or written, and that counts for something. And HAVOC BRIGADE, which is about an orc “infiltration” mission into a human city, and it’s legitimately some of the most fun I’ve had running a game due to the wild freedom afforded to players.)

4. What’s next for Grant Howitt?

At the moment we’re getting Heart delivered to Kickstarter backers (you can pre-order it from our site here) and it’ll be delivered sometime in August) and that’s been a big creative drain – we put out the corebook and four sourcebooks alongside it in a few months.

So at present Chris and I are taking time to recharge, keeping the business ticking over (I’m still writing one game a month and don’t intend on stopping any time soon), commissioning works from other authors, and trying to centre ourselves to get perspective and write the Next Big Thing. We have a few ideas at present; maybe something set in the same world as Spire and Heart, maybe some sort of Deep South ghost-hunting game, or maybe something about eating magical materials to cast neat spells. I dunno just yet.

5. If you could give the readers, writers, roleplayers, aspiring game designers, and puzzle fans in the audience one piece of advice, what would it be?

Make stuff! It’s fun. Then of course the next part, which is just as important, is to release it. You have to get stuff out there, get eyes on it, help people make a relationship with your work.

I see a lot of games which have been in development for, like, a decade – and that’s too long for most projects, you wind up with something weird and ingrown and self-referentially exclusive. So release stuff that you’re unsure but excited about, because nothing is ever perfect, and try to have fun with it.

A huge thank you to Grant for his time. You can follow him on Twitter for updates on his latest projects, visit Rowan, Rook, and Decard for his impressive library of games, and if you enjoy his roleplaying creations, please consider joining his Patreon! There is literally no telling what he’ll create next!