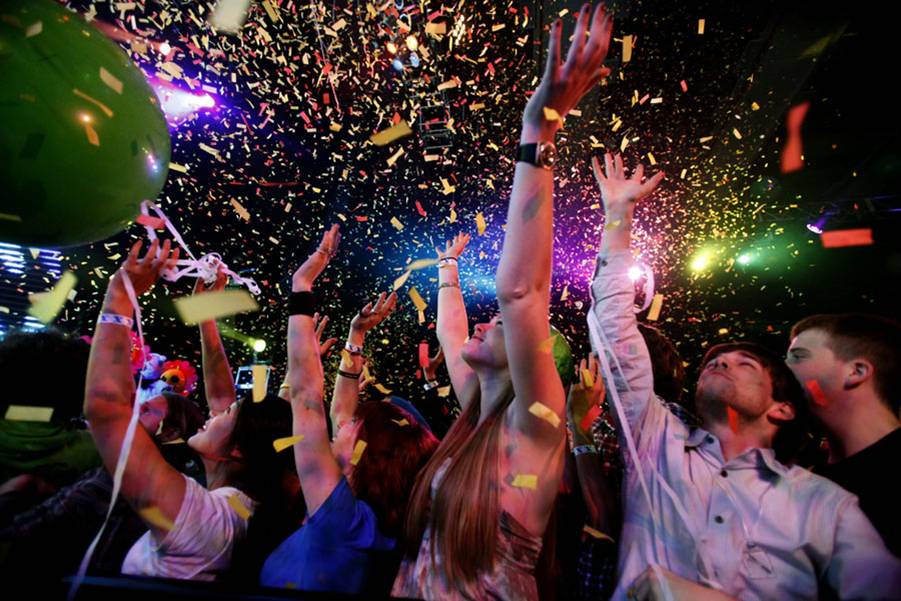 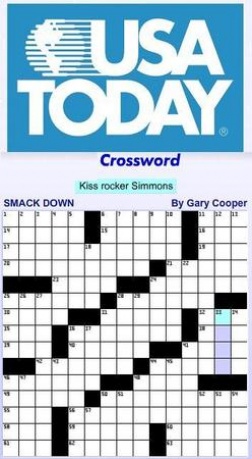 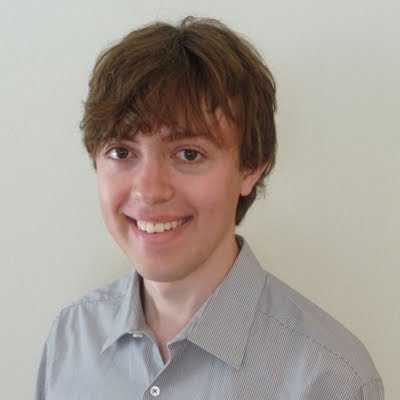 While I couldn’t attend the tournament, I did download the tournament set and tackle the six puzzles prepared for the event. And today, after waiting a few weeks out of respect for the constructors and solvers-from-home to avoid spoilers, I thought I’d offer my thoughts on those puzzles, for any interested PuzzleNationers who might be considering participating in the future.

Before the tournament proper started, solvers tackled a pair of identical 9×9 grids, having to figure out which of the two clues given for each Across and Down coordinate applied to which grid. Intended as a tribute to the tournament’s ninth year, this was a strong, fun opener that used the dual grids to the fullest.

Several clues were repeated, allowing for some clever wordplay. For instance, both 5 Down clues were “Sweet”, cluing DELICIOUS and SCHMALTZY respectively.

Interesting grid entries included ZZ TOP, KANYE, and USER ID, and my favorite clue was either “Catcher behind a plate?” for BIB or “You’ve got two on your head and four in your head” for LOBES.

[Image courtesy of The King of Babylon on Tumblr.]

The tournament kicked off with this enjoyable 15×15 grid where food phrases that featured a last name used the first name instead (so you had CHICKEN A LA LARRY instead of CHICKEN A LA KING, for instance).

Nothnagel’s cluing was topnotch — I circled more favorite clues on this puzzle than any other in the tournament — reinvigorating some tired old standard entries with unexpected spins.

Interesting grid entries included THINKPAD, DRY EYE, TB TEST, and X-AXES, and my favorite clues (I’m limiting myself to two) were “Hefty alternative” for GLAD and “House-monitoring network?” for C-SPAN.

Puzzle 2: Flipping Out by Patrick Blindauer

The next puzzle split a 16×15 grid down the middle into two 8×15 grids, each on its own page. The curious construction definitely slowed me down, even if the cluing and grid entries (including four different entries clued “FLIP OUT”) weren’t all that difficult.

This was easily the weirdest solve of the tournament. Amazing how one little change in presentation can throw you off.

Interesting grid entries included GI JOE, NO SIR, AMADEUS, and NADAL, and my favorite clues were “Writer Rice whose characters suck” for ANNE and the surprisingly intimate “Irish singer who my wife can’t stand” for ENYA.

Puzzle 3: What Happened? by Doug Peterson

The difficulty of each puzzle’s theme began to ramp up here, as we had common words or phrases where the letter H had been replaced with either a T or a Y, and this was revealed with the highlighted entry HISTORY (literally spelling out “H IS T OR Y”).

Doug is a cleverboots, to be sure, and this 21×21 grid was a great test of wordplay and puzzly knowhow.

Interesting grid entries included HOLY GRAIL, ASIAGO, YUGI-OH, and ADORBS, and my favorite clues were “Leader of Ancient Troy?” for TAU and “Co. for surfers” for ISP.

Puzzle 4: Down in Front! by Evan Birnholz

We’re halfway through the tournament puzzles now, and the toughest puzzle in the set shows up, completing a one-two punch of really solid construction and crafty cluing. Six entries in this puzzle were missing letters, creating real words that were shorter than the actual words clued. (For instance, the clue “Person conjuring up spirits?” points to BARTENDER, but BENDER is all that fits into the grid. So each entry lost two or three letters after the first letter.)

This one had me skunked for a bit, I must admit, so it was immensely satisfying to crack the theme and complete the puzzle. Nicely done, Evan.

Interesting grid entries included HOBART, CARPS AT, ECOCAR, and CASSIO, and my favorite clues were “Places to see plays?” for ARENAS and “Delivery recipients” for PARENTS.

Heaney has five 2×2 boxes shaded with different shapes, and each of the four cells in those 2×2 boxes contains a word from a famous four-word movie quote.

For instance, in the upper left corner, there’s a shaded circle filling in a 2×2 box, and each of those four cells contains one of the words “snap,” “out,” “of,” and “it,’ which are incorporated into the across and down entries intersecting those individual boxes. (SNAP is part of OH SNAP and UNSNAP, OUT is part of STOUT and OUTRO, OF is part of POOF and OFFER, and IT is part of IT’S PAT and iTUNES. And SNAP OUT OF IT reads out on the line beside a shaded circle at the bottom of the page.)

This was a super-impressive grid that jammed a lot of entries into an 18×18 grid but never felt oversaturated, and it all flows nicely. This was the puzzle of the night for me.

Interesting grid entries included DELANO, ROBERT E LEE, HERE’S HOW, and HAVE-NOT, and my favorite clues were “Hillary’s claim to fame” for EVEREST and “Ball girl?” for DEB. (Though I must mention one more, simply for the confidence it betrays: “Garment a well-dressed man always wears and slovenly cretins do not (I may be biased here)” for TIE.)

Puzzle 6: Finals by Samuel A. Donaldson

This was the capper to a strong night of solving, and after Puzzle 5, it had a tough act to follow. There were two sets of clues: the Local for newcomers and the Express for established tournament puzzlers, and both had their stumbling blocks. Tight grid construction and some unexpected entries made for a pretty tough wrap-up puzzle, but one that challenged the solver rather than frustrating.

Overall, I thought this year’s Lollapuzzoola puzzles were very clever, and although some of the themes were tough to suss out, they provided a worthy challenge to solvers and plenty of outside-the-box thinking in both themes and cluing to keep your mind engaged.

There were so many great clues and all the personality and panache I’ve come to expect from the event and its constructors. Nine years in, and they’re only getting better.

I look forward to its return, and hopefully some of you will join me in accepting the Lollapuzzoola challenge. (Also, I really hope I can attend next year, or Patti might kill me for missing the tournament AGAIN. *laughs*)