And today, I’d like to return to the subject of crossword-inspired art!

A few weeks ago, I dedicated an entire post to crossword art, exploring paintings, mixed-media collages, and sketches that all had their roots in crossword grids and the wordplay contained therein.

What I neglected to mention is that there have also been crossword-fueled works of performance art.

[Images (this and the one below) courtesy of Art Business.com.]

And what, pray tell, is a monozygotic experiment in telepathic conveyance?

Simple, really. One of the twins randomly selects a crossword puzzle and attempts to psychically project each clue to the other twin, who then fills in the answers to those clues on an oversized grid.

This goes on for 40 minutes, at which point they end the attempt and compare notes to see how well their telepathy worked.

But they’re not done. Oh no.

They then proceed to dance, performing some sort of choreographed display reminiscent of country line dancing.

I don’t know what I was expecting when I first stumbled across “crossword performance art,” but I assure you, dancing never even crossed my mind.

Then again, how else would you celebrate tag-team solving a crossword psychically?

Clearly the Young Brothers have their own unique way of puzzling, but it was kind of them to share it with the world at large, contributing to the overall world of crossword art in an unexpected way.

Riddles, codebreaking, and scavenger hunts are three of my favorite puzzly topics. I’ve covered each extensively in blog posts previously, exploring not only the history and ever-changing nature of puzzles, but how deeply ingrained puzzle-solving is in our culture, past and present.

Tuesday’s post was about a fairly simple encoded puzzle I found lurking inside a short story. That simplicity, that accessibility is part of why I wrote about it.

For you see, fellow puzzlers, today’s post is not about a simple puzzle. Today’s post covers all three of the topics above — riddles, codebreaking, and scavenger hunts — in a sprawling, mindboggling story about a globe-spanning mystery that gamers and puzzlers joined forces to unravel.

It all started in April 2012 with the release of a video game called Trials Evolution, created by the game designers at Redlynx.

Trials Evolution is a motorcycle racing game that incorporates real-world physics into the gameplay, challenging players to complete obstacle-filled courses as fast as possible.

Now, this might not seem like the type of game to conceal a fiendish riddle, but players were actually expecting a challenging puzzle to be hiding within the game, because Trials HD, a previous installment of the series, featured a riddle to solve that helped build the Trials gaming community.

So expectations were high for whatever riddle was lurking inside Trials Evolution. And it did not disappoint.

First, players had to locate a series of wooden planks throughout the game, planks that featured encrypted writing on them. Once assembled and decrypted, the planks featured instructions for a special maneuver for players to perform in the game while a particular piece of music played.

Successfully completing this task earned the player a bonus song, which included lyrics suggesting players transform the song into a visual form. Cagey players realized this meant running a spectral analysis on the song — a visual graph of sound or energy — which revealed a hidden message in Morse Code.

That message led to a website where the images below started appearing daily, one by one.

(It’s worth noting that these images started appearing in late 2013, more than a year after the game was released!)

Each image references a particular scientist. Once all twenty-six images were revealed, the indefatigable players had a visual alphabet to work with.

So when a message appeared using the images instead of letters, players cracked that code as well.

That code led to four sets of coordinates. Real world coordinates across the world! This riddle was only getting more complex the deeper players went!

Something awaited intrepid players in San Francisco, California; Bath, England; Helsinki, Finland; and Sydney, Australia. In each location, players uncovered small chests, each containing a key and a metal plaque with the message “It seemed like forever ago” on it. (The Helsinki location also featured French documents, supposedly from 300 years ago, as well as an antique pocket watch.)

So, what do the keys open? What does it all mean?

Well, there was one last message. On the other side of the metal plaque included in each chest, there was a message:

Midday in Year 2113.
1st Sat in Aug
One of Five keys will open the box
Underneath the Eiffel Tower

That’s right. This riddle can only be unraveled nearly a century from now! This puzzle has gone from a hidden bonus feature in a video game to actual scavenger hunting in the real world, and is now becoming a multigenerational quest. 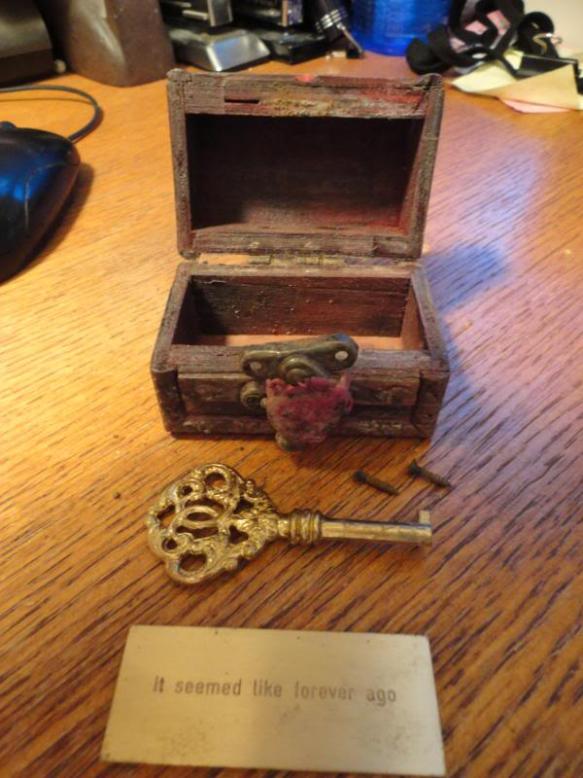 Take a moment and ponder that. It blows my mind to think about a puzzle that took dozens of people to conquer and will now become a story told to friends and sons and daughters as golden keys are passed down, all in the hopes of seeing what awaits us underneath the Eiffel Tower on a particular day in August in 2113.

And it all started with a motorcycle racing video game.

[For more details on the Trials Evolution riddle, check out this thorough write-up on Kotaku.]