Pretty much everyone has at least one Scrabble friend. You know, that person who just destroys all comers by placing unlikely words and unexpected additions, snagging every last available point each turn.

I have two such friends, and their rivalry was so legendary that, during one particularly high-stakes game, the loser would have to write and perform a song celebrating the Scrabble supremacy of the victor.

And those are just Scrabble fans. Scrabble tournament players are another breed entirely.

Let me give you one example. In 2015, a guy from New Zealand won the French Scrabble Championship. Without speaking a word of French.

Yes, this guy memorized every word in the French Scrabble Dictionary and won the championship.

That is next level.

Which makes today’s news story slightly more understandable… even if it is still incredibly stupid and sad.

Mattel, the company who owns the rights to Scrabble outside North America, has come under fire for removing 400 words from the official accepted list of Scrabble words for being offensive or derogatory.

From an article published by UK outlet The Daily Star:

The company has refused to publish the list but the official word checker shows that the banned terms include epithets against black, Pakistani and Irish people as they believe the terms have no place in a family game.

The change follows a similar move by the American rights owner Hasbro and affects competition-level Scrabble, which is played by thousands of people at international tournaments.

And some competitive players claim this is overreaching by Hasbro and Mattel. In fact, three “prominent” members of WESPA, the World English-Language Scrabble Players Association, have supposedly quit competing in protest.

For the record, the Official Scrabble Dictionary, Fourth Edition contains 100,000 words. And for tournament play, the approved list of words reportedly runs as high as 278,000 words.

And these goofs are complaining about 400 offensive and derogatory words that, apparently, they simply cannot compete fairly without using.

Oh, and their argument against removing the words is equally stupid.

“Words listed in dictionaries and Scrabble lists are not slurs. They only become slurs when used with a derogatory purpose or intent, or used with a particular tone and in a particular context.” That’s according to Darryl Francis.

Who is Darryl Francis, you ask? Well, according to the Daily Star, he is “a British author who has overseen official Scrabble word lists since the 1980s.” Cool. 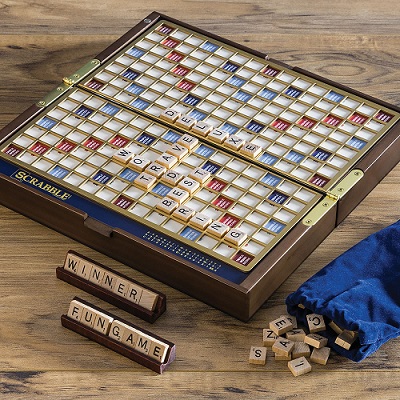 According to Darryl, using the word on a Scrabble board is not offensive. Personally, I think puzzle constructor and author Eric Berlin summed up the issue perfectly in a similar discussion regarding entries like “Go OK” or “CHINK” (as in chink in one’s armor) when they appear in crossword grids:

Perhaps a good rule for this sort of thing is, if you were looking *only at the completed crossword grid* and not at the clues, what would CHINK or GOOK call to mind first?

That’s what I thought, and that’s why I would never dream of using either word in a puzzle.

The same rule should also apply to a Scrabble board. If someone strolls by and sees one of those 400 words, that reflects poorly on the game, the players, and the entire event.

And when you consider that competitive Scrabble in general has come under fire in recent years for a perceived gender bias against women, you’d think they might want to avoid further social dust-ups.

I mean, I don’t recall these same doofuses complaining when LGBTQIA+ terminology was added to the dictionary as part of a 2800-word addition to the approved list. Was that “misguided social manipulation” then? Was that bowing to political correctness?

No. It was just a chance for more points.

Oh, I nearly forgot. The other argument that has been made about removing these words from the accepted list regards the offensive words they DIDN’T remove.

Yup, Karen Richards, another member of WESPA — who helped to run the World Youth Scrabble Championship for 15 years — claims that these changes won’t make the game more family-friendly.

Because children could still play other offensive words.

This is also a dumb argument.

That’s true. But they can’t play these offensive words, so there are fewer opportunities for these apparently slur-happy children to offend other people through the medium of Scrabble.

I wonder if she doesn’t bother to tell her children not to say the F-word, because they can just use another swear instead? I suspect not.

And I know, fellow puzzlers and PuzzleNationers, I know. This is a very minor, very stupid thing. So why are we talking about it?

I have a few reasons:

Seriously, tournament Scrabble players, get a grip. If you can’t win without these words, you probably wouldn’t win anyway.

From time to time, someone will ask me whether a certain word is appropriate for a crossword. It could be a new constructor, or an aspiring constructor, or a fan of crosswords. It could be about a relatively new slang term, or an obscure word, or a foreign word, or a celebrity. Sometimes, they’re wondering if it’s too hard, or too new, or too niche, or whether it’s appropriate for crosswords at all.

That’s the thing. There is no one source you can go to for all your crossword questions. There’s no definitive list of appropriate words or phrases, because the language is constantly changing and evolving. Pop culture is dynamic, and new ideas, concepts, and personalities are always cropping up. In that way, crosswords are essentially eternal, because the source material constantly shifts in popularity and familiarity. There are always new words to fill those iconic black-and-white grids.

But, if you were looking for that mythical definitive list of appropriate words, it’s not unreasonable to assume you’d go to the International Scrabble Dictionary, the official source for what is allowed as a valid answer word in a game of Scrabble.

Recently, for the first time since 2015, new words were added to the approved list. Over 2800 fresh entries are now officially eligible for tournament and at-house use, and they’ll all appear in the latest edition of Collins Official SCRABBLE Words. (Collins, which also publishes the Collins English Dictionary, added the words after they were approved for use in the Merriam-Webster Dictionary last year. These 2800 words join over 276,000 already approved for Scrabble play.)

It’s quite appropriate that we’re covering this story in June. As many of you are aware, June is Pride Month, and awareness of LGBTQ+ issues and culture affects all aspects of life, even puzzle games!

Among those 2800 newly-approved entries are non-binary and gender-neutral words like “genderqueer” and “agender,” as well as related terminology like “misgender” and “cisgender.”

But the LGBTQ+-friendly term that’s getting the most attention in Scrabble circles is “ze”. This two-letter word is a gender-neutral pronoun, allowing individuals who don’t identify as strictly male (he/him) or female (she/her) to better differentiate themselves and their gender identity.

For Scrabble players, the word opens up a whole host of new possibilities. After all, “ze” allows far greater opportunity to score big points by playing that valuable Z tile. (“Ze” is only the third two-letter z-word to be authorized for the game, joining “za” and “zo.”)

Now, obviously, in the grand scheme of things, this is a very small step for LGBTQ+ representation, but it is a step. After all, every opportunity to include LGBTQ+ culture and embrace it is part of making it a more familiar part of life for all of us.

In this small way, Scrabble includes previously marginalized individuals by not only accepting these new words, but by changing and adapting in order to do so. It’s an act of welcoming.

Here’s hoping there are far more acts like this, big and small, to come.