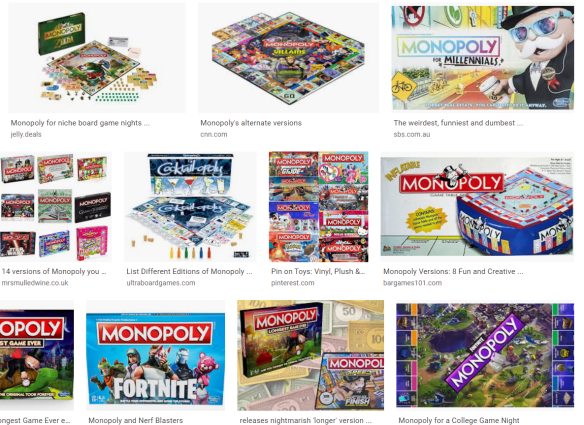 When it comes to licensing and variant titles, no board game comes close to the empire of different versions available that has been amassed by Monopoly.

Not only can you get one tailored to every one of the 50 states, but there’s a version of Monopoly for practically every pop culture phenomenon out there, covering everything from Game of Thrones and Star Wars to Spongebob Squarepants and The Office. There are versions with credit cards instead of cash, and even a cheater’s edition where players can be handcuffed to the board.

Sure, other classic board games are following suit. You can find versions of Clue centered around The Golden Girls or Dungeons & Dragons, and a Nightmare Before Christmas version of Operation out there.

But that’s a drop in the ocean compared to the myriad versions of Monopoly that are available for board game fans.

Even Godzilla is getting in on the fun. 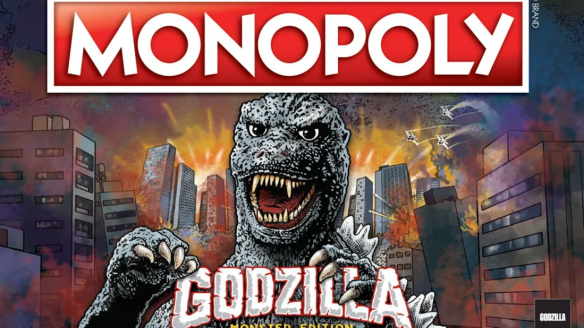 There are even factories and bases to build instead of houses and hotels.

But I must ask the obvious question. If you’re moving a monster token around the board, why aren’t you smashing houses and hotels instead of building bases and factories? I mean, the only monopoly your average kaiju is looking for is a monopoly on destruction, am I right?

Maybe a few intrepid players will cook up some fun variant rules that encounter the monsters to rampage rather than rebuild.

Of course, if you’re looking for an excuse for destruction, maybe the accompanying Godzilla-themed Jenga will be more up your alley. 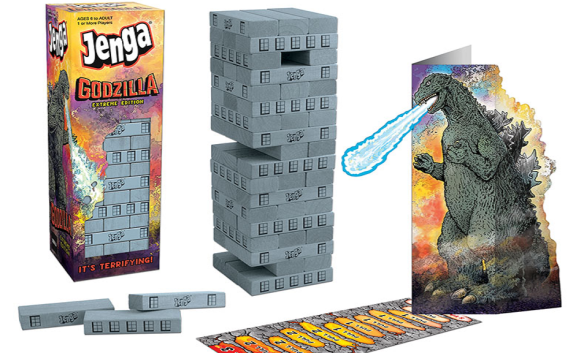 Yes, it’s just like normal Jenga, except the tower pieces are painted to look like pieces of a building, and Godzilla is slowly marching toward it, his atomic breath glowing as he anticipates the unbridled joy of knocking over yet another skyscraping edifice.

That’s certainly more in keeping with the King of the Monsters and his traditional manner for dealing with massive man-made structures. It won’t be as destructive as, say, Smash City or Terror in Meeple City, but it’s certainly a step in the right direction.

And, honestly, if there are two games that could use a little destructive sprucing up, it’s Monopoly and Jenga.

And today, I’m posting the results of our #PennyDellPuzzleCartoons hashtag game!

For the last few months, we’ve been collaborating on puzzle-themed hashtag games with our pals at Penny Dell Puzzles, and this month’s hook was #PennyDellPuzzleCartoons, mashing up Penny Dell puzzles and anything and everything having to do with stand-up comics, film and television comedians, funny movies, funny shows, funny plays…even one-liners or jokes!

Slide-o-Futurama (and therefore Around the Bender)

He-Man and the Masterwords of the Universe

“By the power of GraySkill-O-Grams! I have the power!”

“There’s no need to fear, Underdog is Here & There!”

“I hate meeces to Bits and Pieces!”

“Heroes in a Halftime, Turtle Power!”

Courage the Coming and Going Dog

Scooby Two by Two, Where are you?

“Three From Nine Is the Anagram Magic Number”

“In A Word Planet Janet”

A fellow puzzler even cooked up a version of the Steven Universe theme song all about Crypto puzzles!

We are the Crypto-Gems
We’ll always save the day
And if you don’t believe us
We’ll always find a way
That’s why the people of this earth
Believe in
Geo, Zoo, and Verse…
And Steven!

Have you come up with any Penny Dell Puzzle Cartoons entries of your own? Let us know! We’d love to see them!

We’re reaching out to puzzle constructors, video game writers and designers, board game creators, writers, filmmakers, musicians, and puzzle enthusiasts from all walks of life, talking to people who make puzzles and people who enjoy them in the hopes of exploring the puzzle community as a whole.

And I’m overjoyed to have Sara Farber as our latest 5 Questions interviewee!

[Sara, alongside husband and partner Bryan
and their product testing toddler.]

Sara is a writer and content creator who has worked on numerous toys, games, and products for children and adults alike. From fill-in-the-blank story templates to interactive CD-roms and games with educational components, she combines fun content with classic puzzle games to make the most of a child’s playtime.

The debut creation of her company Galactic Sneeze is the movie mashup party game Schmovie, which encourages players to conjure up hilarious movie titles that match different cards drawn at random. (A perfect puzzle-theme generator for crossword fans, to be sure!)

Sara was gracious enough to take some time out to talk to us, so without further ado, let’s get to the interview!

1.) Many of the products you’ve worked on involve a heavy learning aspect as well as gameplay. What’s the secret to making learning fun, especially for a young audience?

Great question. I aim to create content that engages in a meaningful, enjoyable way. I include silly jokes, rhymes, playful songs, and games. I infuse humor into everything I do… not just for the kids, but for the parents as well. If mom and dad have to hear the same counting song over and over again… it better be a good one!

Sometimes toys will have a character say, “learning is fun” or “I love to learn!” I’d rather have kids discover something is fun on their own, rather than convince them via a Jedi mind trick.

2.) You not only masterminded the creation of Schmovie, but you wrote the questions for Hasbro’s Pointing Fingers Game. What about these sorts of free-form party games appeals to you, instead of more formal board games or other formats?

My favorite projects are ones where I help develop the personality/voice of a brand, especially when it involves a comedic spin. Creating a party game is about packaging fun in a strategic way. It involves devising a clever schtick, coming up with a killer name, creating a simple yet engaging play pattern, and in most cases… infusing it with humor.

I enjoyed working on Pointing Fingers because I was asked to come up with hundreds of wacky scenarios. And Schmovie has been a blast since we’ve essentially provided a platform for players to be creative and funny. The game creates new memories and inside jokes for players, and I love reading the hilarious titles submitted on our Facebook page.

3.) You’ve worked with some pretty well-established characters, including Elmo, Dora the Explorer, and Scooby-Doo. Like many puzzle designers, you have to put a new spin on a recognizable brand. What’s your process for working with established properties while still adding your own touch?

There’s more flexibility with some brands than others. The key is to know the character and the “do’s” and “don’ts” of the property inside and out before diving in. I watch a lot of kids’ TV shows, read episode scripts provided by the licensor, and stay current on what toy and game companies are doing. My goal is to bring a fresh approach to classic play patterns. Rather than including a traditionally sweet preschool-sounding song, I might work with a composer to create a jazzy little number or a funny rap.

Some brands, like Penguins of Madagascar or SpongeBob SquarePants, are awesome to write for since the characters lend themselves to so much humor. Others are less about distinctively funny characters and more about the unique situations they find themselves in. If I’m writing a script for a toy or digital game with a more complex play pattern, I spec out the logic first so I know every single condition I need to write for. Then I go back and write all the character dialogue. And then I’ll go back through and kick it up with humor, sounds, and music to bring it to life.

My time is split between running Galactic Sneeze, the “fun stuff think tank” I founded with my husband, and taking on consulting/freelance projects for larger toy and game companies. I enjoy the mix. We’re currently working hard to spread the word about Schmovie. It launched in September at select retailers, and recently hit the shelves at Barnes & Noble. (W00T!)

We’re currently focused on inventing rather than publishing, which means we come up with concepts and then pitch them to larger toy and game companies. We have a few new games in the works we’re excited about. We also developed a story for an animated feature film that we’ve been looking for the right home for, as well as a kids’ TV show. The cool thing about running a “fun stuff think tank” is that we’re always working on fun stuff.

5.) If you could give the readers, writers, and puzzle fans in the audience one piece of advice, what would it be?

Always bring a game to a party. Never bring a fruitcake.

Many thanks to Sara for her time. You can check out Sara’s latest projects on her website and the Galactic Sneeze website, and be sure to follow her on Twitter (@SaraFarber) for games, humor, and updates on all her endeavors. I can’t wait to see what she (and Galactic Sneeze) come up with next.