It’s summer, and when it comes to Hollywood, summer means big blockbuster action movies. One of my favorites is the Bruce Willis / Samuel L. Jackson modern classic Die Hard With a Vengeance.

For those who are unfamiliar with the film — shame on you! — it’s the third installment of the Die Hard franchise, featuring catchphrase-spouting New York City cop John McClane battling terrorists, criminals, and all sorts of unsavory characters.

In Die Hard With a Vengeance, a bomber named Simon is terrorizing the city and McClane is one of his playthings, forced to play Simon Says and accomplish increasingly difficult tasks that Simon sets before him. As McClane (and electrician Zeus Carver, who saves McClane from the first of Simon’s games) race around the city trying to prevent other bombs from going off, Simon enacts an elaborate scheme to rob the city.

Thankfully, McClane and Zeus have a knack for brain teasers and riddles, because several of Simon’s devious tasks require quick thinking and sharp puzzle skills.

First, Simon hits them with a math problem:

As McClane fervently tries to do multiplication in his head, Zeus realizes this isn’t a word problem, it’s a riddle. The man was going to St. Ives when he met this man, meaning the man was coming from St. Ives. So the wives, sacks, cats, and kittens are irrelevant. Only the narrator is going to St. Ives, so the answer to the riddle is 1.

[Seems like a nice place to take your many wives…]

In their second puzzly task, Simon offers the following question:

“What has four legs and always ready to travel?”

McClane doesn’t get it, but Zeus immediately identifies it as an elephant joke for kids (although he doesn’t actually deliver the punchline: an elephant, because it has four legs and a trunk).

They quickly spot a nearby fountain with an elephant statue. Awaiting them is a suitcase bomb and two empty jugs. When McClane opens the suitcase, he accidentally arms the bomb, and Simon calls to inform them that the only way to disarm the bomb is to fill one of the jugs with exactly four gallons of water and place it on the scale in the suitcase.

[And they say what we learn in school has no practical, real-world applications…]

The problem is the two jugs hold 3 gallons and 5 gallons, respectively. Simon has set them up with another brain teaser, but one with a dire time limit to solve.

Thankfully, there are two ways to solve this brain teaser. 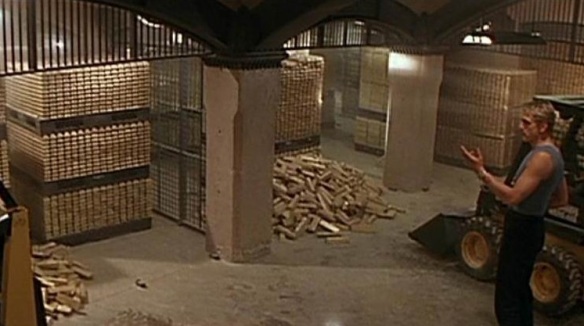 [While Simon has McClane and Zeus run
all over the city, he has one specific goal…]

The final riddle Simon gives Zeus and McClane is another brain teaser masquerading as a math problem:

At the time of the film’s release, there had been 42 presidents, so 21 out of 42 was President Chester A. Arthur, and Chester A. Arthur Elementary School was where Simon had hidden one of his bombs (a fake one, as it turns out) as a distraction.

In the end, McClane and Zeus outwit the cunning Simon, and once again, puzzle-solving skills save the day! Hooray!