When it comes to board games, there’s no game more ubiquitous than Monopoly. Everyone has played it, every household has a copy somewhere, and whether you enjoy the game or not, you still have a favorite game piece.

Not only has Monopoly conquered game shelves around the world, but there are so many specialty versions of the game that you’re guaranteed to find one just for you. From The Golden Girls and Star Wars to Hello Kitty and Littlest Pet Shop, from cat lovers and horse lovers to Game of Thrones and The Walking Dead, there are an insane number of Monopoly variants on the market.

And some of these Monopoly games are just plain weird. (Heinz, Sun-Maid, and Best Buy all have their own versions!)

So today, we thought we’d take you for a stroll down Memory Lane (which was renamed Mediterranean Avenue in the 1950s) to revisit the board game everyone knows, but in forms you might not have seen before.

These are the weirdest, least likely, and most baffling versions of Monopoly I could find. (Oh, and if you’re looking for Cheaters Edition, we’ve already covered that one.)

First, let’s look at the different ways they’ve tried to update Monopoly over the years.

One of the bright spots of playing Monopoly is the colorful money. Whether you’re the banker or one of the players, you can’t resist rifling through stacks of fake cash.

So when Monopoly announced that they’d be updating the game with a calculator, credit cards, and even electronic banking, I couldn’t help but ask, “Why?” No amount of tech, no matter how cool, can duplicate dropping a $500 dollar bill.

Again, this version has cashless gameplay, as well as property values that rise and fall as you play. Although the property value gimmick is an interesting change, losing the money seems to suck a lot of the fun from the experience. 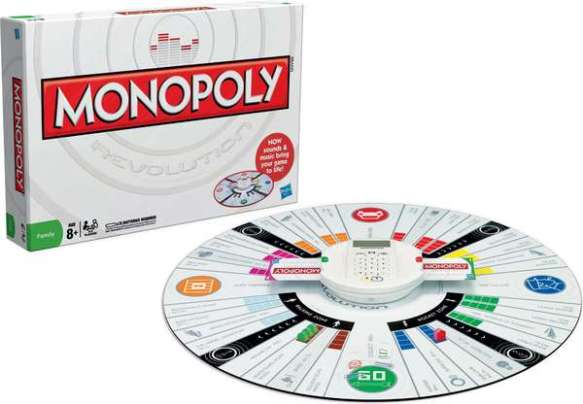 No, you’re not overthrowing the elites and eating the rich in this version of the famous game. Instead, they just made the classic board round. (Oh, and also added an electronic aspect to track players’ money and add sound effects.)

Several of the branded versions of Monopoly have also used the circular board, many claiming that it helps make the game more compact and portable.

In this greed-fueled version of the game, the first player to reach a million dollars wins. This does strip down the game — eliminating railroads, utilities, and tax spaces — as well as limiting the number of players to 4, but they make up for it by adding upgradable tokens and twists through Fortune Cards and Millionaire Lifestyle spots (instead of Chance and Community Chest).

This boils Monopoly down to its roots, and you feel slightly dirtier just by playing it.

Similar to Monopoly Millionaire, this isn’t a race to acquire property and muscle out your competitors, it’s a race to fill your tower with billboards representing different companies. And you can up the rent you charge as your tower grows.

On the plus side, you can’t go bankrupt in this game. I guess you’re too big to fail.

Of course, there are blinged-out versions of Monopoly that are larger, more ornate, and designed more as discussion pieces than games to be played.

But nothing quite compares to this $10,000 edition of the game with 18-karat-gold dice, diamond ornamentation, and actual money. (Oh, except for the FAO Schwarz version with actual currency that costs $100,000. It’s insane.)

That is, except for Monopoly Live, which features an electronic talking tower with motion sensors.

Yeah, the infrared tower runs the game. No dice, no cards, no money. Everything is managed with the tower and a few interactive game pieces on the board.

Have you ever wanted to play board games with Big Brother? Now you can!

Now let’s look at some of the intriguing licenses and branding the game has embraced over the decades. 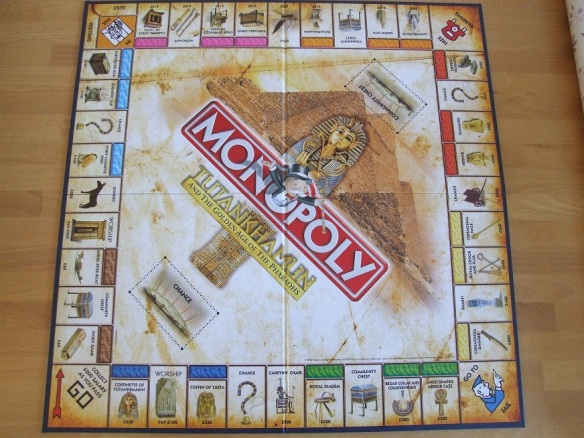 Monopoly: Tutankhamun and The Golden Age of the Pharaohs

Go big or go home. Based on the King Tut exhibit that toured the world in the mid-2000s, this game has you building shrines and pyramids instead of houses and hotels, along with gold versions of the classic game pieces. (Bummer, I wanted to be a scarab or the unblinking red eye of Ra!)

Honestly, this is weird, but pretty cool.

The most “OK Boomer” of the editions of Monopoly I could find, this one can’t seem to decide if it’s celebrating millennials or mocking them.

On one hand, you’re buying experiences instead of properties: retreats, music festivals, etc. On the other hand, the game box itself says, “Forget real estate. You can’t afford it anyway,” while the game has spaces like “Parents’ Basement” for you to land on.

Hey, does regular Monopoly not provoke enough ill will or table-flipping in your household? Why not try a version where each player is a candidate trying to earn votes in different states?

Yeah, in this one, your token indicates party loyalty — red or blue, how lovely — and features everything from fundraising, Executive Power spaces, and a White House token.

Pizza and board games have been tag team partners for mellow game nights forever, but this is something else entirely. In Monopoly Pizza edition, you’re trying to collect as many pizza slices as you can.

This is actually a pretty cute idea — and friendlier to kids than the soul-crushing real estate version we all know — but it’s hard not to be jarred by the pizza box packaging and menu-style gameboard.

It makes me hungry instead of angry. I guess that’s a win. 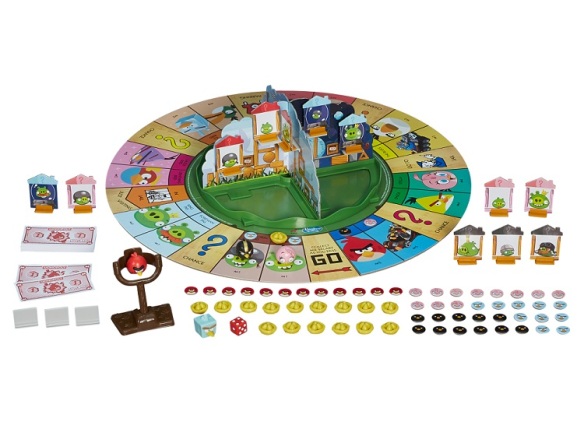 Oh, and speaking of anger, check out this fusion of board games and app games.

In this strange mix of property acquisition and dexterity, you get to pick up characters AND fire tiny figures at cardboard pigs across four different worlds (versions) of Angry Birds.

It’s a very busy game board — Mousetrap-level busyness, to be honest — but makes a valiant attempt to bring both games together.

Would you like to play a business-inspired game while reminiscing about the delightful highs and lows of the dotcom bubble bursting? This version has got you covered, replacing houses and hotels with households and offices.

With properties like Lycos and Yahoo! on the board — as well as “timely” tokens like a surfboard, a pixelated hand-style cursor, and a virus — this is a nostalgic trip back to the days when modems screeched at you to indicate a successful connection and your dad could ruin a four-hour song download by picking up the phone to call your grandma.

If you’re looking for a kid-friendly version of House Divided, there’s always this sugary-sweet version of the game. In this version, players are members of either Team Unicorn or Team Llama, and they’re trying to buy up spaces for their particular animal. But instead of properties, you’re buying yearbook-style awards for your creature like “most huggable.”

Rainbow-splashed and glitter-bombed to the extreme, this game is very weird — was I supposed to know llamas and unicorns have some sort of rivalry? — but also very cute.

And here we go. The weirdest official version of Monopoly I could find.

The outdoorsy version of Monopoly — in that you just sit around until it’s your turn to do something — bass fishing was clearly begging for its own dedicated version of Monopoly. You can stop rubbing that lamp, your wish has been granted.

Yeah, you land on equipment, boats, and places to fish, as well as random spaces for large AND small-mouthed bass.

Seriously. It’s not all. If you want to really splash out, there’s an even more specialized version out there dedicated to bass-fishing lakes. All the properties are lakes, though there are still random fish spaces.

Let’s end with a nice one, shall we?

Designed with a tempered glass board and translucent game pieces, this game is absolutely beautiful. It feels crisp and clean and delicate. It’s a conversation piece, basically, but one you can play.

It’ll set you back about $80 on Amazon, and it doesn’t inspire the same adrenaline rush as Bass Fishing Monopoly, but it sure is pretty to look at.

There you go, fellow puzzlers and PuzzleNationers. I hope you enjoyed this trip to various Boardwalks, Park Places, and community chests.

Keep in mind, these are just the weird ones actually licensed by Monopoly. Next week, I’ll be covering the weirdest ones made by outside parties! 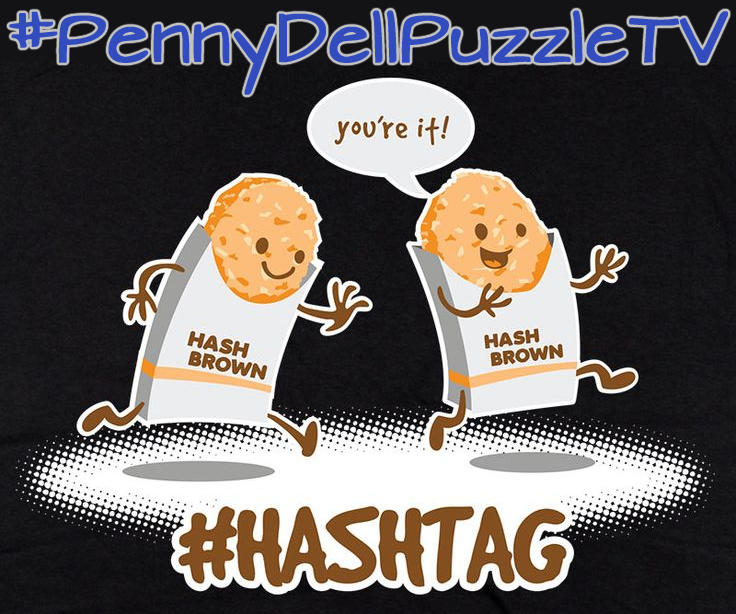 For years now, we’ve been collaborating on puzzle-themed hashtag games with our pals at Penny Dell Puzzles, and this month’s hook was #PennyDellPuzzleTV, mashing up Penny Dell puzzles with television shows, characters, catchphrases, actors, actresses, hosts, and more!

Examples include: I Love Loose Tile, Will Shortz & Grace, and Match Game of Thrones.

Leave It To Weaver Words

Father You Know the Odds Best

Sabrina the Teenage Which Way Words

My Three of a Kind Sons

My Two at a Time Dads

Take it from St. Elsewhere

The Odds and Evens Couple / You Know the Odds Couple

Whose End of the Line is it Anyway?

America’s Next Top to Bottom Model

3rd Rock from the Sunrays

Square Deal or No Deal

Nine(teen Kids) of Diamonds (and Counting), Add One, Plus Fours, Seven Up…

Give and Take Two

Little Puzzler on the Prairie

The Price Is Right of Way

Daisy of Our Lives

Say That Again to the Dress

Riddle Me This Is Us

One Day at a Rhyme Time

One Day at a Time Machine

Unsolved Mystery Movie (or Person or Melody or State)

Heads & Tails of the Class

“No Alphabet Soup for You!”

The Walking Dead Keep on Moving

“Those Were the Daisy”

And members of the PuzzleNation readership also got in on the fun!

On Twitter, the intrepid Screenhog contributed “Tales of the Cryptoquizzes.” Excellent stuff! Keep it coming, Screenhog!

Have you come up with any Penny Dell Puzzle TV entries of your own? Let us know! We’d love to see them!