On Tuesday, I gave you a general rundown of what it was like exploring the massive spread of puzzles and games on display at this year’s New York Toy Fair.

In today’s post, I’d like to highlight some of the puzzles and games that most impressed me. I think many of these will also appeal to many of my fellow puzzlers and PuzzleNationers as well.

So let’s dive right in!

One of the prime spots in the Launchpad area for first-time attendees was given to the team at Steamforged Games Ltd., who have brought the video game franchise Dark Souls into the board-game realm. 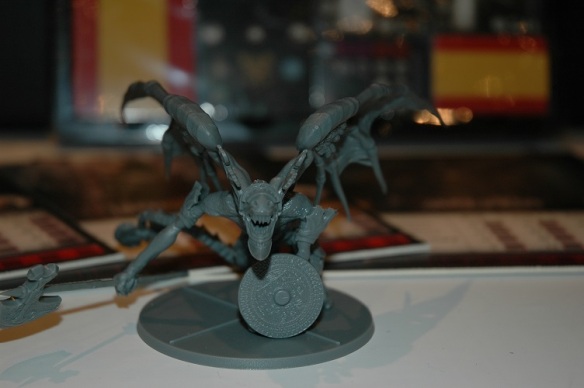 Between one and four players can test their mettle against various creatures, battling to capture their souls and use them to make your character stronger and more capable. The impressive array of miniatures, player cards, and tokens makes for an interactive experience that should satisfy both video game fans and board gamers alike.

For a more traditional family-friendly puzzle game, the crew at Befuddled Games has you covered with Kerfuddle and Tree Top Hop, both of which are suitable for solvers of any age group.

Kerfuddle combines a touch of Boggle with the ever-changing gameplay of Fluxx. Roll the dice and use them to form words, but be careful — the “Shake It Up” cards can make your word forming much more challenging.

Tree Top Hop is a great intro game for young players, as they move around the tree top, spelling words on their cards and racing to the treasure at the center of the board. By combining word-building and strategy, this is a terrific gateway game for new players. 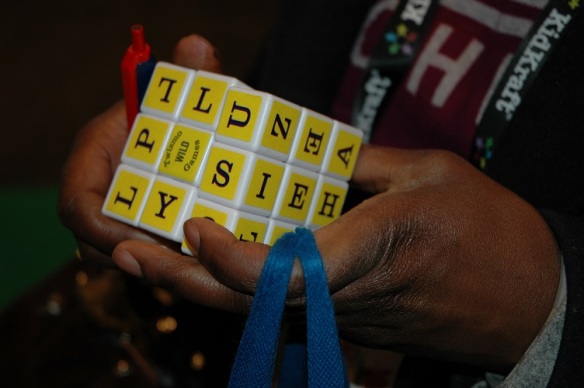 Along the same lines as Kerfuddle is Twizmo! Words, except instead of dice, you have a Rubik’s Cube-style Twisty puzzle providing you with the letters you’ll use to build your word list. Designed by the same team who brought us Tak•tak, Twizmo! Words is a strong quick-play game for any Boggle fans in your household. 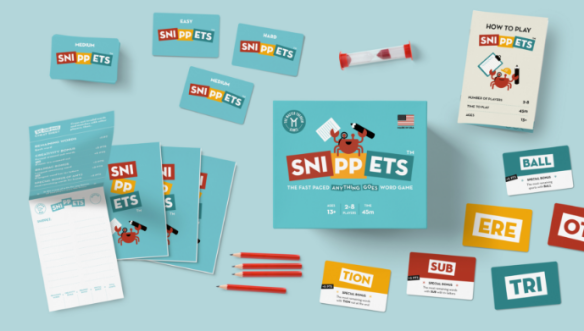 Snippets takes the list-building idea in another direction. Instead of random letters, you’re given a three-letter snippet of a word, and it’s up to you to come up with as many words containing that snippet as possible. So, if you’ve got TRA, you can write down EXTRA, TRAIN, STRAP, and so on.

And to close out this collection of word-forming games, we have Letter Tycoon, which adds a monetizing mechanic that really spices up the gameplay. Here, not only are you making money by forming words, but you can patent letters so that when other players use them, you cash in as well. It’s a really clever take on the word-building genre of games. 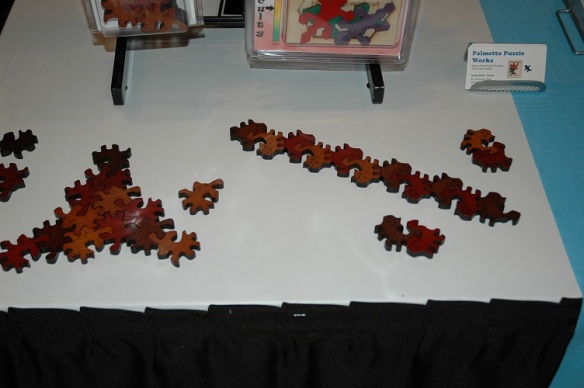 We now move on from combining letters to combining jigsaw pieces. The puzzles from Palmetto Puzzle Works all center around tessellations — shapes that repeat and interlock in many different ways.

Whether you’re trying to fit the pieces into a given space or you’re connecting them freestyle, these well-made wooden puzzles bring an M.C. Escher touch to the world of jigsaw-style solving. 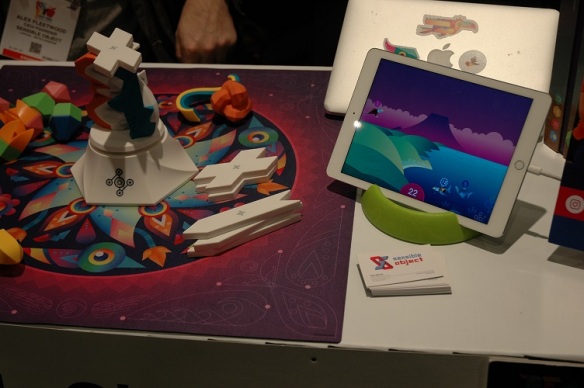 Beasts of Balance, on the other hand, has players using game pieces in a different way, as solvers stack the animal shapes and try to keep their ever-growing tower of creatures and artifacts from toppling over. The game has a tablet interaction feature that enhances both the gameplay and the storytelling aspect of the game, making the most of new school and old school puzzling.

But if you’re looking to do some puzzly building in a different way, Maze by Seedling is a solid choice. Here, you can map out and design your own marble maze, and then tackle your own creation with a fully-functioning labyrinth board, complete with marbles, walls, and holes to avoid.

And while we’re on the subject of do-it-yourself puzzling, the crew behind Pinbox 3000 have designed a build-your-own pinball game system that allows for infinite customization. They give you everything you need to build a functioning game, and then leave the theme, bells, and whistles totally up to you.

I wrote about this one back when it was a Kickstarter project, and it was cool to see the brand continuing to thrive and grow.

Another gaming classic with a modern twist is Tatsu, which combines Asian-inspired mythology with backgammon-style gameplay. Designed by the same creative team as the tile-placement game Hive, Tatsu is a clever, elegant game all about strategy and guile. It’s easy to learn and tough to master, and I suspect it will do quite well.

If you’re looking to combine strategy with rapid-fire gameplay, Tenzi is for you. In Tenzi, you’re given ten dice, and you have to keep rolling them until all ten match. It’s like Speed Yahtzee! But with dozens of additional variant games at your disposal, from stacking to scoring to rule-shifting games, this dice game has legs and is easy to tote around to play anywhere. 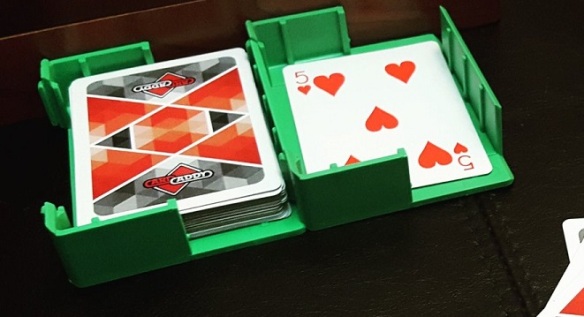 If you’re looking to take your card games anywhere, the team at Narrows Hill have a great solution for you. The Card Caddy is not only a protective case for any deck of cards, but it opens up into a perfect card-dealing and sorting setup for ease of play.

We also got an early glimpse of a forthcoming addition to the Fluxx family of card games. Since Fluxx is celebrating 21 years on the market this year, the crew at Looney Labs is celebrating with Drinking Fluxx, a spirits-soaked version of their famous chaotic rule-shifting card game.

You can mix and match the various ingredients to try to create a winning formula (and perhaps a sideline as a bartender for your fellow players). Just make sure you call a cab after playing. 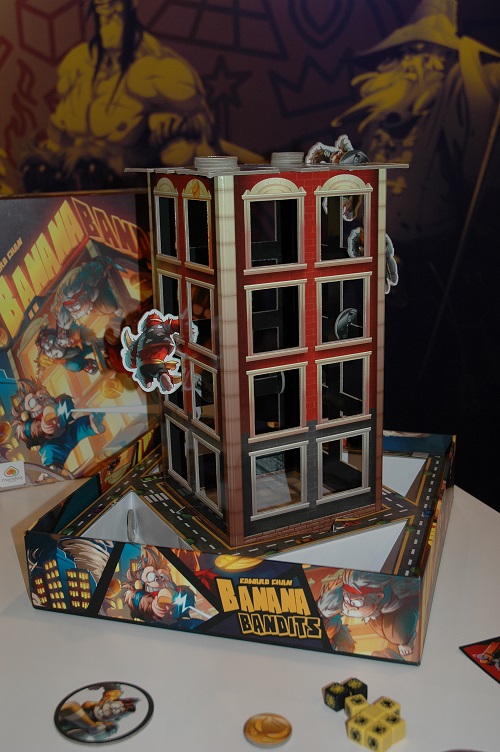 Whereas Tenzi and Fluxx are quite portable, Banana Bandits from CMON Games requires some space, since you have an entire 3-D building to set up as your game board. As you and your fellow players try to prove yourselves as worthy successors to the boss of the Banana Bandits, you’ll climb and explore the building, collect coins, and tangle with opponents, all on an impressively realized game space.

Will you be top banana, or is it time for you to split?

And the last game I’ll be discussing today is Doctor Who: Time of the Daleks, an elaborate galaxy-spanning game where you play as one of six Doctors traveling across time and space in order to complete missions, save the innocent, thwart your enemies, and generally wreak timey-wimey havoc.

Between the terrific miniatures and the expansive options available for players, this was one of the highlights of Toy Fair for me, and I can’t wait to see how they incorporate additional Doctors into the game later down the line. 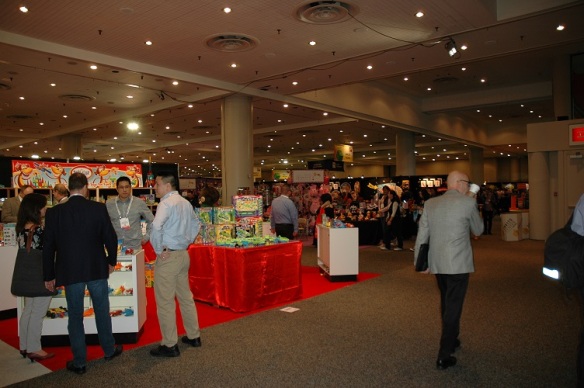 Obviously this is just a small sample of all the fantastic, eye-catching puzzles and games that graced New York Toy Fair this year. But nonetheless, it’s an impressive group, covering so many different aspects of the puzzle and game world, and constantly blazing new trails in terms of creativity and innovation.

I have no doubt you’ll be seeing more about some of these projects as 2017 rolls onward.

[You can check out our full gallery of photos from New York Toy Fair on Facebook by clicking here!]

The 114th New York Toy Fair was this past weekend, and I joined several fellow puzzlers from Penny Dell Puzzles on an excursion to the Javits Center to check out everything the toy, puzzle, and game industries are bringing to the table in the coming year.

In short, it was fantastic. Dozens and dozens of companies, from the titans of the industry to small outfits utilizing the crowdfunding model to get their feet in the door, were there to show off their creations. 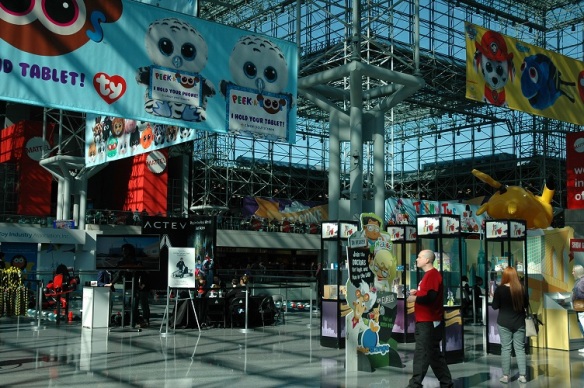 Although it’s a four-day event and we were only attending that Saturday, I suspect you could spend all four days exploring the complex and still miss out on some incredible stuff.

Like a giant singing LEGO Batman made of LEGOs.

My chums and I were on a mission: to check out what puzzle and game companies were bringing to market in 2017. After picking up our ID badges, maps, and guides to the Fair, we dove right in.

We started off in the Launchpad section, a place where first-time and developing exhibitors from all over the world could introduce themselves to press, buyers, and other reps in the toy industry.

I’m a huge fan of seeing what newcomers have cooked up — hence how often I’m on Kickstarter and other crowdfunding sites — and the Launchpad was loaded with intriguing puzzles and games.

For instance, the team at Floss & Rock focused on puzzling for kids, with balance, pattern matching, and memory games, while the crew at Brixies put their own spin on the LEGO model with specialized pieces designed for making intricate models of animals, famous landmarks, and more.

From there, we ventured into the Puzzles and Games section, and we were immediately awash in every style of puzzling and gaming imaginable.

Vintage puzzles were represented, with deluxe versions of Clue and Scrabble on display, as well as retro metal brain teasers and mazes from Meridian Point.

The folks at Orbet International were pushing the boundaries of what you can do with Rubik’s-style Twisty puzzles, and the team at Twizmo! Games put a Boggle-inspired spin on Rubik with their letter-filled take on the classic cube. 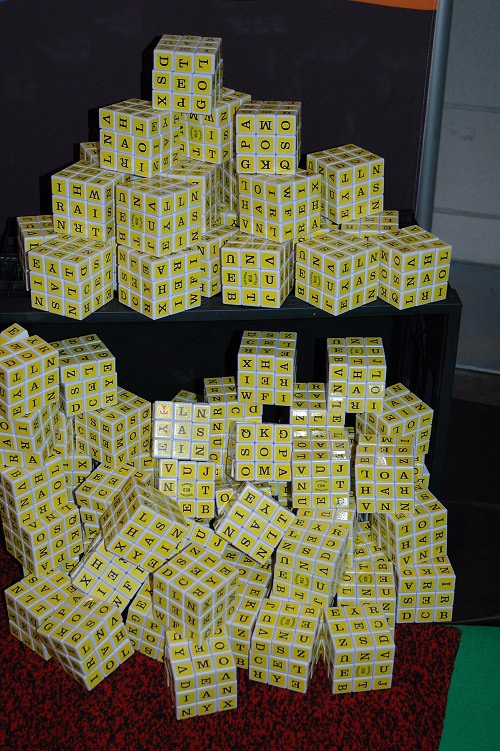 From dice games to deduction games, from puzzles that fit in your pocket to ones that require the entire dining room table, seemingly every form of puzzling and gaming you can think of was under one roof.

… as well as wooden models like this Eiffel Tower from IncrediBuilds…

… not to mention this elaborate display celebrating 25 years of building fun with K’nex.

And, naturally, you couldn’t help but run into some familiar faces at the Toy Fair.

Looney Labs was out in force, with their Loonacy, Mad Libs, and Looney Pyramids brands on display.

And not only were they touting their latest edition of Fluxx — Math Fluxx, review coming soon! — but they’ll be celebrating 21 years of Fluxx games with Drinking Fluxx later this year!

(Plus, when I inquired about the Better With Bacon expansion pack to their Just Desserts game, an actual doctor told me to eat all the bacon I want. Now THAT’S how you hook someone.)

The team from Bananagrams also had a strong showing at Toy Fair, with the company’s line having grown to letter-tile sets in seven different languages! Between that, their inflatable Bananagrams banana balloon, and their terrific tote bags, the Bananagrams brand was everywhere! 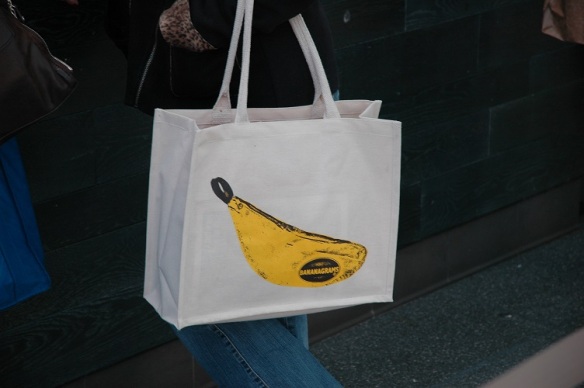 All in all, the event was an absolute blast. The future of puzzles and games has never been brighter, and we here at PuzzleNation look forward to being a big part of that promising future.

[A LEGO model of the Javits Center.]

You can check out our full gallery of photos from the event on Facebook by clicking here, and be sure to come back Thursday for a closer look at some of the puzzles and games that really caught our attention at this year’s New York Toy Fair!