Some of the most important moments in the Star Trek franchise center around altering the past through time travel. Choosing to save Edith Keeler in the original series, the Enterprise-C sacrificing itself to bring peace to the Klingons and the Federation in Star Trek: The Next Generation, or Sisko preventing a Tribble bomb from killing Kirk in Deep Space Nine… iconic scenes both humorous and galaxy-changing involved rending the fabric of time and space. (Heck, the new film franchise was based entirely on changing the timeline from what we knew previously!)

So when I heard that Looney Labs updated their time-jumping strategy card game Chrononauts to include elements from the Star Trek universe, it seemed like a perfect fit. How did they do? Find out today as we review the new Star Trek Chrono-Trek card game.

[A sample of each of the 11 different types of cards in the game.]

Much like its inspiration Chrononauts, Chrono-Trek is all about the cards. You’ve got assignment cards, ID cards, timeline cards that make up the playing space, artifact cards, cards that change history (and others that change it back), as well as cards that can help or hinder your fellow time travelers.

At the beginning of the game, the timeline cards are laid out in a 4×9 grid that represents the historical timeline from the Star Trek shows and films. Each player then draws an ID card representing a Star Trek character. Each character has certain victory conditions — some combination of events that must be preserved or changed in the timeline and artifacts to be acquired during play — that must be met for you to win the game. The ID cards are ranked by difficulty, indicating how complex the victory conditions are.

As for the other cards available to the player, they allow you to manipulate time, find artifacts, or manipulate the cards in your opponents’ hands. (For Fluxx players, some of these Action cards will seem very similar, as will the artifact cards, which are played just like keepers in Fluxx.)

[A small glimpse of the timeline.]

The history-changing aspect is the puzzliest part of the game, as you determine what moments to change (and which to protect from your opponents) in order for your timeline to come to pass. But you must be careful, because you also need to ensure that you don’t accidentally end the game by allowing the anomaly from the series finale of Star Trek: The Next Generation — the Anti-Time Devron Anomaly — from preventing life on Earth. (In nearly every scenario, that’s a game over for all players. Pretty daunting, to say the least!)

And although bending time to your will and winning is certainly fun, watching the effect ripple down through the cards after making a bold history-altering move is arguably the best part of the game.

It will take one or two playthroughs — with easier ID cards only — to get used to the game mechanics, but after that, it’s a quick and easy deep-dive into the more complex victory conditions and a much more immersive and challenging play experience. (The game can go a bit too rapidly if you’re only using two players, so I’d recommend playing with four or more players to get the most out of the game.) 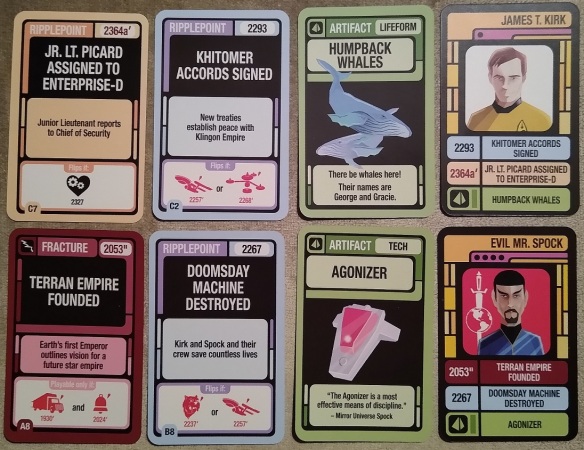 [A comparison of a one-pip (easy) ID card and a four-pip (complex) ID card. Kirk simply requires you to protect one moment, invert another, and collect an artifact. Meanwhile, Evil Spock requires you to find the Fracture card, manipulate two events just to place the Fracture, and still maintain another moment AND acquire an artifact. That’s a much taller order.]

The designers did an impressive job figuring out which moments from the 50 years of Star Trek history to include in the timeline, which characters to offer as ID cards, and so on. For a Star Trek enthusiast, there are great references and little callbacks galore to favorite moments from the series. Not only that, but the game ups the ante from the original Chrononauts formula, keeping all of the best aspects of that game while making this one feel unique.

I posed the question in the intro asking how Looney Labs did marrying Star Trek and Chrononauts. The answer? They boldly went where no Star Trek card game had gone before, and created one heck of a fun adventure.

[Star Trek Chrono-Trek is available from Looney Labs and other participating retailers.]