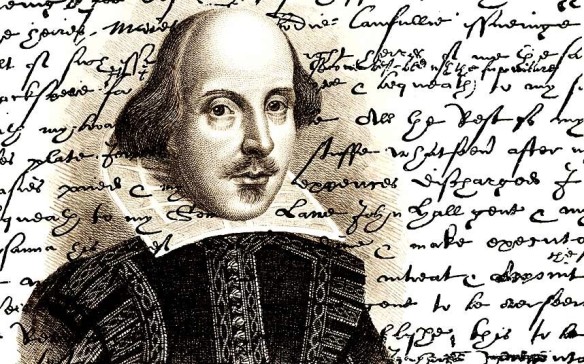 William Shakespeare is a name we all know well. We’ve studied his works in school, used words and phrases he coined or popularized, and we’ve seen numerous films, TV shows, and other adaptations inspired by his writing.

But for more than two centuries, there has been a great deal of debate over whether the man known as William Shakespeare actually wrote all of the brilliant works for which he is acclaimed.

There are whole societies dedicated to either rooting out the truth or proffering their candidate for who really wrote the works of Shakespeare. Many names are bandied about, including a who’s who of luminaries at the time, like Sir Francis Bacon, Christopher Marlowe, John Donne, Queen Elizabeth I, Ben Jonson, Edmund Spenser, Anne Hathaway, Sir Walter Raleigh, and perhaps most ardently, Edward de Vere, the 17th earl of Oxford.

[Image courtesy of The Truth About Shakespeare.]

Now, granted, there’s plenty to suggest Shakespeare collaborated with other writers on some of his works, but we’re not talking about collaboration here. We’re talking about ghostwriting some of the most famous works in human history.

But, you may be asking, other than a shared love of wordplay, what does the Shakespearean authorship question have to do with puzzles?

Over the years, several theorists have reported finding secret codes or ciphers in the text of Shakespeare’s works which hinted toward the true author.

Samuel Morse, a man who knows one or two things about codes, discussed how Sir Francis Bacon had created such codes, probably as part of his spy work, perhaps even going so far as to create an encrypted signature of sorts that appears in multiple Shakespeare works.

According to a BBC America article on the subject:

One scholar at the time went so far as to produce an enormous “cipher wheel” composed of a 1000-foot piece of cloth that contained the texts of Shakespeare and others for easy comparison and decryption. He claimed that by deciphering codes, he’d discovered the location of a box, buried under the Wye River, that contained documents that would prove Sir Francis’s authorship. But a dredging of the area came up with nothing.

Now, there’s little doubt that Bacon was a code master, but there’s equally little evidence that he wrote the works of Shakespeare.

Of course, if there are codes in those works, perhaps Shakespeare placed them there himself.

According to a theory by scholar Clare Asquith, Countess of Oxford and Asquith, Shakespeare’s careful and curious word choices were intended to foment subversive political messages and advance his own agenda of strong Catholic beliefs.

Constancy in love was Shakespeare’s way of alluding to the importance of a true faith in the ‘old religion’, she says. More specifically, his puns and metaphors often circled around certain key phrases. For instance, to be ‘sunburned’ or ‘tanned’, as are his heroines Viola, Imogen and Portia, was to be close to God and so understood as a true Catholic.

It’s amazing that we know so little about someone so influential. And it’s only natural that we try to fill in the blanks with our own theorists, be they explanations of Shakespeare’s impressive knowledge or possibilities of alternative authorship.

As it turns out, that question might finally have an answer, thanks to the sleuthing of Dr. Heather Wolfe of the Folger Shakespeare Library in Washington, D.C.

The story begins with Shakespeare’s father:

John Shakespeare, from Stratford-upon-Avon, was ambitious to rise in the world. He was certainly not the first Englishman keen to put his origins as a provincial tradesman behind him. Among his contemporaries in Stratford, he was a figure of fun for his social climbing. English class snobbery has a long pedigree.

He had made a small fortune in the theatre, and was buying property in and around Stratford. Now he set out to consolidate his reputation as a “Gentleman”. Under the rules that governed life at the court of Elizabeth I, only the Queen’s heralds could grant this wish.

[Image courtesy of The Shakespeare Blog.]

And it’s this application for a family coat of arms that provides the connective tissue between the man and the bard. “They point to someone actively involved in defining and defending his legacy in 1602, shortly after his father’s death,” according to Wolfe.

But whether there are codes lurking in the Bard’s works or not, the mystery of the man himself might be the greatest puzzle of all.

6 thoughts on “The Puzzle of the Bard”