As a puzzler, there are few article titles that serve as more efficient clickbait than “6 CHALLENGING CROSSWORD PUZZLE CLUES THAT WILL LEAVE YOU CLUELESS,” so when I saw that title, fellow puzzlers, you know I clicked.

This article by the crew at Wealth Words claims to offer “the trickiest clues that have ever existed.” That is quite a bold statement. Shall we try our luck and see how we do?

Now, before we start, it’s worth noting that we’re at a huge disadvantage here, because any clue, easy or tough, can be made easier if you know some of the letters in the word thanks to words in the grid you’ve already placed that cross this particular entry. We don’t have any of those helper letters, so we’re going to have to rely solely on our sharp wits, wordplay skills, and love of punnery.

Most crossword fans know that a question mark virtually always means there’s wordplay afoot, so you know you can’t take this clue at face value, which means anything relating to Pisa is probably out. If you focus on “leaning,” that could take you anywhere from Jenga to drunkenness, so let’s play with “column.” Other columns appear in graphs, Excel files, and newspapers.

A-ha. Newspaper column. And some of those “lean” to either the left or the right, depending on the author. This train of thought leads us to the intended answer OPED PIECE.

Grade: A- (It’s a solid clue where the answer doesn’t necessarily immediately jump out at you, but makes total sense once you’ve puzzled it out.)

[Now, to be fair, “club” was capitalized in the clue on the webpage, but I felt like that was misleading, so I fixed it here. After all, capitalization can be used to great effect in crafty cluing — particularly if you conceal the capital word by making it the first word in the clue, which is always capitalized regardless — but here, it becomes an unnecessary red herring.]

This one is slightly harder, because you don’t immediately get the hint that there’s wordplay involved, since there’s no question mark.

This is one of my favorite kinds of clever cluing, the sort where our preconceived notions of word forms works against us. (Also, it sounds naughty, but isn’t, which I also quite enjoy.) At first glance here, the phrasing makes it sound like “strips” is a verb, when it’s really a plural noun.

And once you get into that mindset, you realize that we’re not talking about that kind of club, and the intended answer emerges: BACON.

Grade: A (Misdirection plus a tongue-in-cheek bit of lewdness? Great stuff.)

I have no idea how this one made it onto the list. Anyone who knows their animal groupings knows that a group of crows is a MURDER. There’s no tricky cluing or misdirection here, just something that might not be in the common knowledge. (But again, I think people are more likely to come up with this one that “exaltation of larks,” “smack of jellyfish,” or “parliament of owls.”)

Grade: D- (Could be difficult for some solvers, but only for unfamiliarity, not style.)

Okay, this one has quotations around it, which both means it’s a spoken line and it’s likely non-standard, so you won’t find it in a dictionary. It’s probably a phrase, and used in casual conversation.

The answer, as it turns out, is I HEAR YA, which I don’t think any solver would come up with unless they had a few crossing letters filled in for them. The slangy spelling of YA and the informal wording altogether pretty much precludes this from being a “see-it-and-get-it” sorta clue. 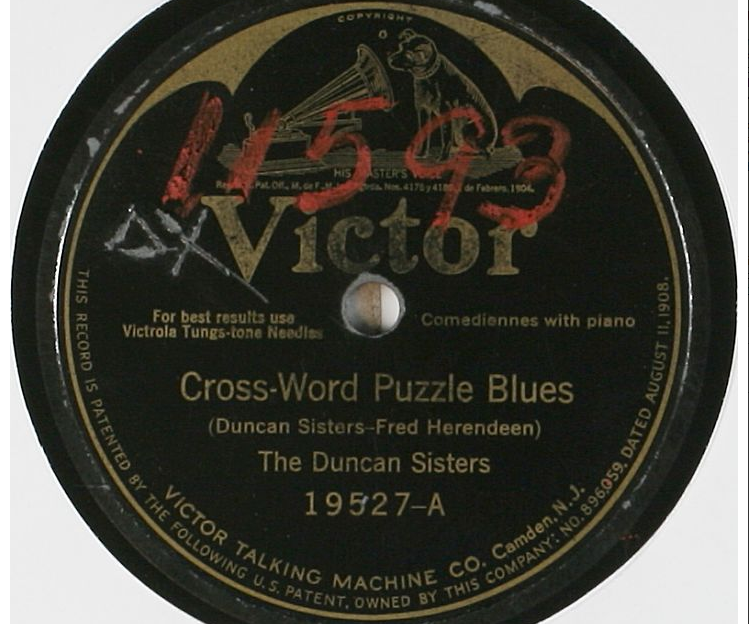 Brackets are used less commonly than quotation marks or question marks in crossword clue, so it’s more likely that a casual solver wouldn’t immediately recognize what to do with this clue. Usually, brackets indicate this is a non-traditional clue, either making an oblique reference to something or indicating it’s a non-verbal clue like a cough.

In this case, this is meant to be the actual sound of someone crying or something of that nature. So it could be something informal like CRYIN’ or TEARS (as opposed to the more traditional “in tears”) or something like that.

As it turns out, they were looking for I’M SAD. Which is pretty blah. It’s not a standard phrase, and comes off as a cheaply constructed way out of a bad corner, not a solid bit of fill to keep the puzzle interesting.

This clue is fairly tough, because it’s both vaguely worded and has a curious letter count. It’s plural phrasing (with “they”), so that immediately makes you want to tack an S onto the end of the word. But it’s also such a short entry that a two-letter word plus S doesn’t seem to fit the clue.

So what comes in last? “End” would fit, if not for the plural phrasing. “P.S.” comes in last, but “P.S.’S” is really clunky, and I don’t recall ever seeing that pluralized.

So what were they looking for? XYZ. Ah. Alphabet entries. You’ll usually see entries like this centering around the first three letters (ABC) or a random string (“RST” seems to come up more often than most), and XYZ certainly fits the bill. But, in the end, it’s not a real entry, and it feels a little cheap, despite the decent wordplay involved in the cluing.

So, what did I think of the Wealth Words “6 CHALLENGING CROSSWORD PUZZLE CLUES THAT WILL LEAVE YOU CLUELESS” challenge?

I thought it started off very strong with two clever, slippery clues that required you to play with the words and come at them from several angles before stumbling upon the correct solution, and I quite enjoyed those clues.

But the quiz took a real nose dive in quality starting with Clue #3, which had no wordplay at all. #4 and #5 relied heavily on being slangy non-standard verbiage rather than adept cluing or creative fill, and #6 was a bit of a cop-out, even if the cluing quality rebounded nicely.

All in all, I thought the specious entries outweighed the clever cluing on display early on, making for an underwhelming set of clues.

What did you think of these group of challenging clues, fellow puzzlers and PuzzleNationers? Did you enjoy them or find them wanting? Let us know in the comment section below, we’d love to hear from you!