If you’re familiar with ThinkFun and their challenging and clever logic puzzle games, you know that most of them are one-player endeavors designed to pit the player against the game itself, playing repeatedly with increasing levels of complexity added as the Challenge Cards toss new twists and turns your way.

It is a formula that has worked well for them in the past, and yet, it’s one that they’ve completely put aside with their newest offering, Mystic Market. 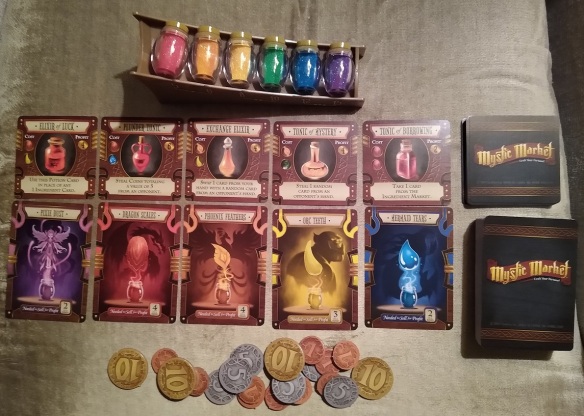 Rather than focusing on deduction in some form — through completing tasks, paths, or circuits — Mystic Market requires players to react to both their opponents’ actions and the ever-shifting demands of the game moment-by-moment in order to achieve victory. You see, players at the Mystic Market are competing to earn the most money. But how do you do that?

To start, players receive four ingredient cards and five one-point coins. They then take turns interacting with the communal Ingredient Market and Potion Market, where they can buy, sell, or swap ingredients, as well as craft or play potions.

Each potion you craft and play not only brings in a profit, but it also allows you to take actions that affect the game (even when it’s not your turn).

Say hello to the Value Track. This inclined plane contains samples of all six ingredients in the game, representing their current value on the market from least expensive to most expensive. (The numbers represent the value of ingredients when sold as a set, while the dots indicate the cost of ingredients.)

The value of ingredients can be altered in two ways: by player actions or by random supply shifts.

When a player sells ingredients — either as single cards or complete sets — they move the colored vial representing that ingredient to the top of the Value Track, lowering its current value (because there’s now more of that ingredient on the market, so the price comes down). The other vials shift as a result of this action, and any vials that were previously cheaper increase in value due to relative rarity in the market.

This mechanic not only brings an element of randomness to the game (because prices aren’t static, as they are in many other games), but it also introduces a deeper level of strategy and opportunism to the gameplay as well.

Because you can purposely affect the market, either inflating or deflating the value of ingredients through your purchasing and sales, you can create new chances for investment or spoil the attempted investments of your fellow players if you see them stockpiling certain ingredients.

You also have to keep a close eye on the Value Track, because you want to spend as little as possible when buying, and then strike while the iron is hot and sell when your ingredients are worth more.

There are a plethora of resource management games out there, with tons of mechanics for buying, selling, and swapping resources between players or with some sort of market or bank, but I can’t think of another game that simulates an ever-changing spectrum of prices and values for those resources as simply or as elegantly as Mystic Market does.

So, really, you have to play two games in one. You’re not just an alchemist working to create magical potions from otherworldly ingredients like phoenix feathers or mermaid tears; you’re also a savvy entrepreneur looking to corner the market on the ingredients you need and make a tidy profit from your investments.

It’s certainly a lot to manage, and it took a handful of playthroughs before I really felt like I had a good handle on balancing all of the game’s elements. But with each successive round of play, I understood and enjoyed the experience more than the previous game. Because as you get better at taking advantage of the Value Track, so do your opponents. Each game becomes the magical equivalent of an arms race as you try to build your fortunes and make the most of a dwindling supply of resources.

This isn’t the sort of game I’d expect from ThinkFun — competitive gameplay isn’t really their style — but that only made Mystic Market a delightfully surprising treat that still ably represents their core values: teaching through play. This time around, they manage to make business, investments, and the stock market all integral parts of a terrific gaming experience.

[Mystic Market is available from ThinkFun and other participating retailers.]