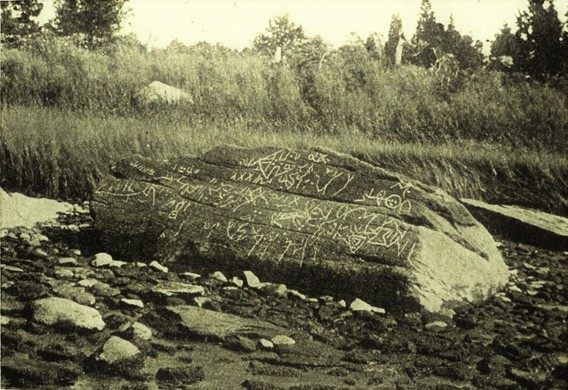 We’ve spent a lot of time over the last few months discussing treasure hunts, but those are far from the only puzzly adventures that can send solvers out into nature. If you prefer your puzzling to have a codebreaking or cryptographic angle, we’ve got you covered there as well.

There are three mysterious stones in the United States alone that bear mysterious messages that have boggled the minds of puzzlers for decades upon decades.

In Massachusetts, an eponymous state park museum is the home of the Dighton Rock, a stone covered in petroglyphs that has baffled viewers for centuries. (The earliest writings about the rock date back to 1690!)

[Images courtesy of Atlas Obscura. Look at the difference
between the two photos. Time is definitely running out…]

In the mountains of North Carolina, the petroglyphs of the Judaculla Rock defy decoding. Even dating the petroglyphs proves difficult, with estimates placing the origins of the rock’s message between 200 BC and 2000 BC. Sadly, efforts to solve the mystery of this former sacred site of the Cherokee people are fighting the forces of time itself, as erosion threatens the integrity of the glyphs.

And for solvers in the Southwest, New Mexico has the Decalogue Stone, which bears an inscription that, depending on the language used to decode it, could be a record of the Ten Commandments or a report from a lost explorer or warrior. (The possibility that it’s a hoax has been floated by more than one investigator as well.) 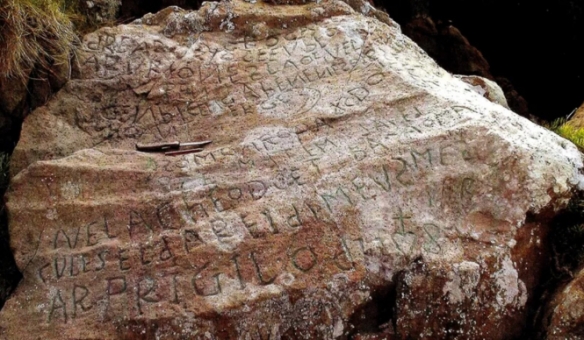 [Image courtesy of The Connexion.]

But for today’s mystery, we turn toward the country of France, more specifically the village of Plougastel-Daoulas in Brittany, the home of a rock that has baffled solvers for at least a century.

Unlike the Dighton Rock, which was moved from the waterline of the Taunton River, the inscription on this rock spends most of its time submerged in the Atlantic Ocean, revealing itself only at low tide. The 20-line inscription utilizes letters from the French alphabet, but the actual language used has eluded solvers. Suggestions include Basque and Old Breton. (There are also two dates on the rock: 1786 and 1787.)

Those dates lead some articles to estimate that the inscription’s origins date back as far as 250 years, but I think that’s unlikely. The rock was only discovered four or five years ago, so that’s a huge window wherein those dates could’ve been carved into the rock.

So, what makes this rock so interesting, given the examples we’ve shared above? Well, this rock inspired the village of Plougastel-Daoulas to host a contest last year to decipher it, offering a prize of 2000 Euros to anyone who could translate it.

[Image courtesy of The Daily Mail.]

In February of this year, the prize was awarded to two solvers who pitched different solutions to the inscription:

The first hypothesis came from Noël René Toudic, professor of English, who has a degree in Celtic Studies. He said that the inscription was likely about a soldier, Serge Le Bris, who may have died at sea during a storm. Another soldier, Grégoire Haloteau, was then asked to engrave the rock in memory of the dead man.

The second hypothesis came from reporter and writer Roger Faligot, and comic book author and illustrator Alain Robert. They suggested that the inscription was by someone expressing their anger against those who caused the death of a friend.

Despite those pitches — and all of the headlines declaring the mystery solved — this case is not officially closed yet. Perhaps other towns will follow the Plougastel-Daoulas model to encourage both visitors and solvers.