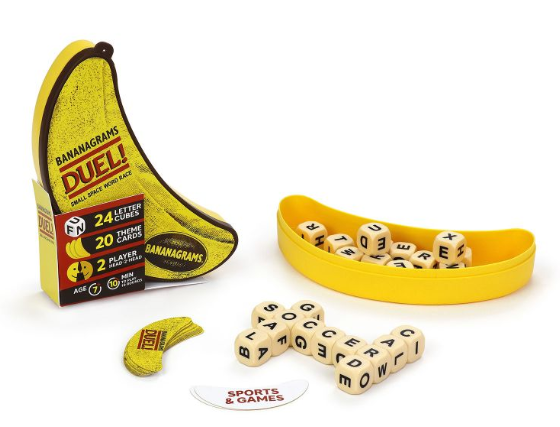 For instance, Bananagrams Duel replaces the iconic Bananagrams tiles with letter dice. Does this really make a difference in the game play? Let’s find out together.

Bananagrams Duel is a two-player word/grid-forming game, consisting of 24 six-sided letter dice, a handful of banana cards, and a handy carrying case. When it comes to travel-friendly puzzle games, it doesn’t get much simpler than this.

Instead of pulling from a shared pool of letter tiles, each player gets 12 of the 24 letter cubes. The goal is the same as a traditional Bananagrams game: to create a criss-crossing grid of recognizable words. You’re allowed to shift and flip any of your dice to other letters as needed, and the grid can change at any time. (Unlike, say, Scrabble, you’re not locked into a word if you’ve already spelled it. Anagramming is always an option.)

But those little banana cards do more than help you keep score. On the other side of each card is a theme. In one of the variant rule sets detailed in the little instructional guide, your completed grid must now contain at least one word that fits the given theme.

That little tweak can make a traditional Bananagrams game much more challenging. After all, if you’ve ever played the regular version of the game, you know how words can just evaporate from your vocabulary during play, only to suddenly return once your opponent has completed a grid. Now imagine that same feeling, but with a theme of sports or six-letter words attached to it.

In one of our test games, we actually made this harder on ourselves by trying to make EVERY word in the grid fit the theme. 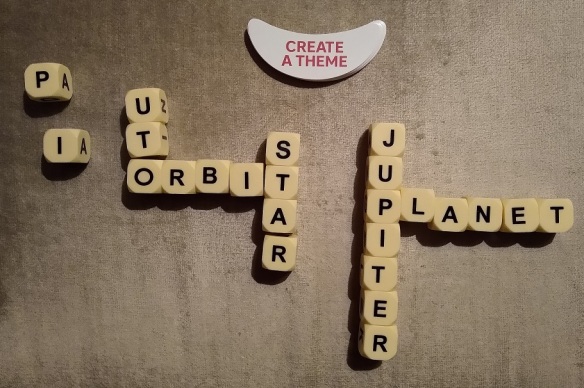 As you can see here, we were allowed to choose our own theme, and we chose “Space/Astronomy.” I was devilishly close to completing my grid, but lacked the “L” I needed to spell Pluto. Meanwhile, my opponent went with a two-word grid that gelled nicely.

I don’t recommend trying it this way — unless you’re looking for a serious challenge — because the usual themed rules are tough enough.

Although an occasional bad pool of letter cubes can leave you without a letter — like, for instance, an L you really need — for the most part, it didn’t feel like the letter cubes were more restrictive or limiting than a traditional pool of Bananagrams letter tiles. All the dice shifting made for a different, yet familiar solving experience.

Plus it’s super-easy to come up with your own variant rules to enrich repeated games. The instructions list 5 alternate rule sets, and I would gladly recommend one that went well with us: having your opponent roll one of your dice for you and making you use it as the starting letter for a grid word.

Bananagrams Duel manages to boil down the Bananagrams formula to its most essential and playable form yet. And with a much faster clean-up (or pack-up and stash-away, if you’re on the road/in the airport), it’s more travel-friendly than ever before. They’re not lying when they call it a small space word race.

Bananagrams Duel is available from Bananagrams and participating local and online retailers, and it’s featured in this year’s Holiday Puzzly Gift Guide!