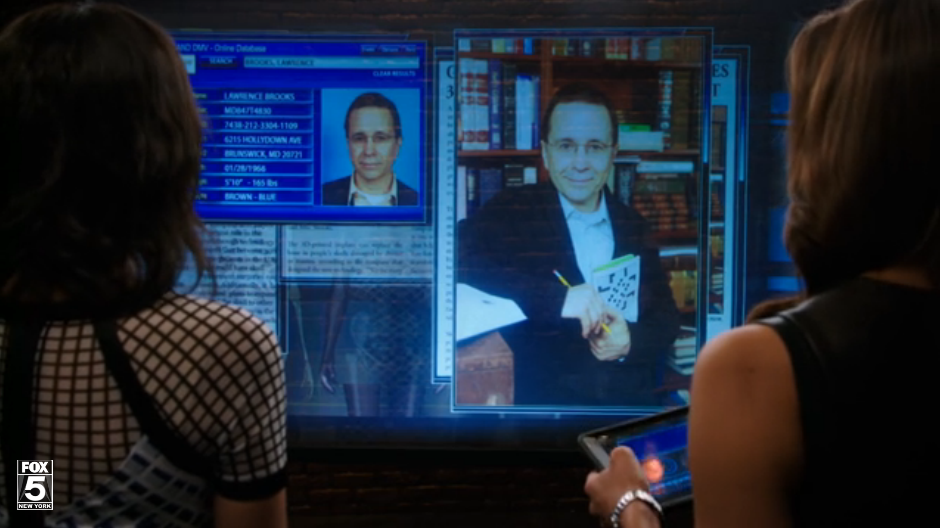 In today’s edition of Puzzles in Pop Culture, we join the forensic team at the Jeffersonian Institute to uncover what happened to a prominent puzzler. It’s Bones, episode 8 of season 10, “The Puzzler in the Pit.”

The episode opens, appropriately enough, with Special Agent Seeley Booth solving a crossword. (Given the looser grid construction, it’s either a British-style crossword or a cryptic crossword. Either way, points to Agent Booth.)

Both he and forensic anthropologist Dr. Temperance Brennan (Bones, to some) are called into work after a body is found in a fracking pit. The harsh chemicals in the pit are causing the body to deteriorate faster than normal, but some clever chemistry saves the day. Although a blood sample the team collects is too degraded for a positive match, they manage to identify the body from a rare surgery performed a few years before.

The body belongs to Lawrence Brooks, reclusive syndicated crossword constructor, considered by some to be a master in his field. His wife quickly points the fickle finger of blame squarely at his ambitious assistant, Alexis Sherman. Apparently, Brooks promised to use Alexis’s puzzles and dangled the possibility of a promotion to co-editor, but delivered on neither. 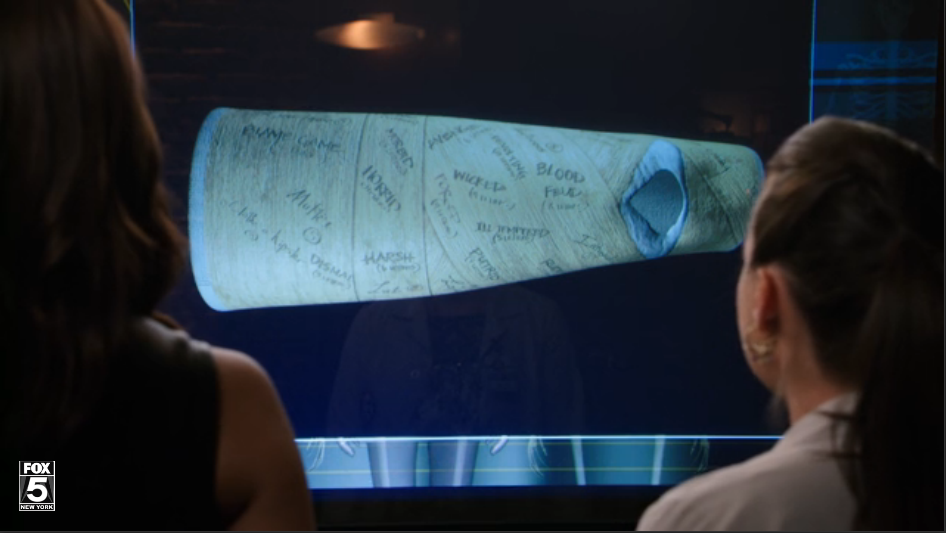 An analysis of a cast Brooks had on when he died reveals crossword clues written on it, but in two different handwriting styles. Some of the clues are straight-forward and simple synonym-style clues, hardly the work of a master constructor like Brooks.

Other key words on the cast include punish, attack, payback, and justice. The team suspects the other clues are a message from his killer.

When Booth and Special Agent James Aubrey interview Alexis, she plays a nasty phone message from an unidentified man, claiming that a stranger has been hanging around lately. Alexis agrees to help a forensic artist sketch the mystery man. 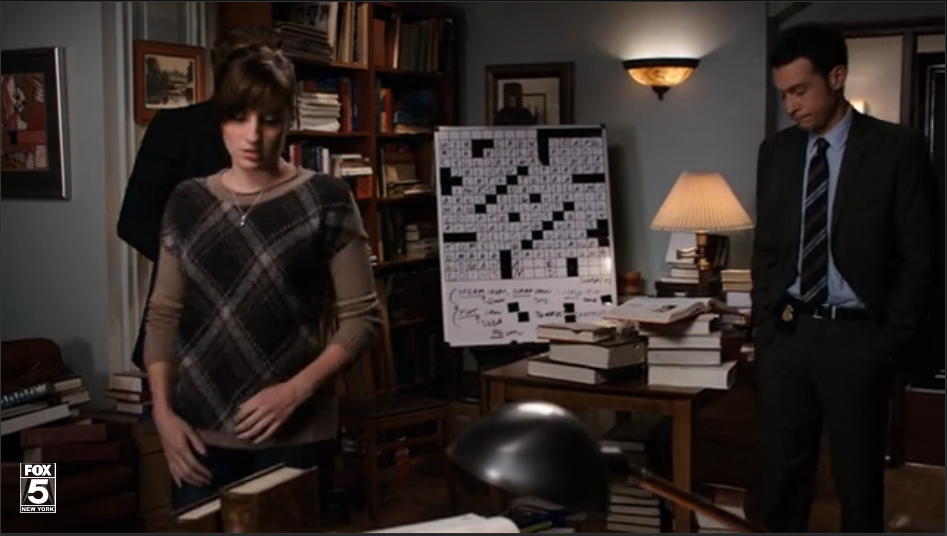 Sadly, this is the last appearance of a visible puzzle in the episode, leaving solvers with Brooks’s murder to solve instead of a crossword grid. 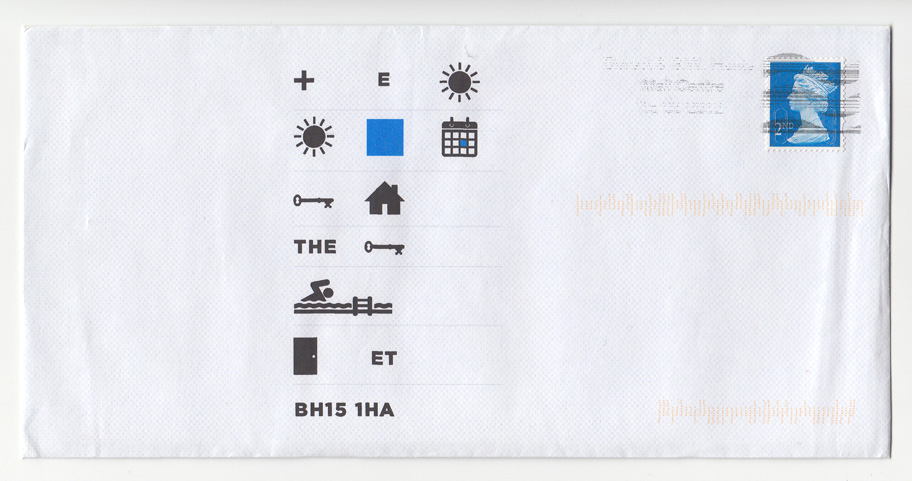 [Not an image from the episode, just one of James Addison’s puzzly envelopes.]

Meanwhile, the team discovers that Brooks’s bones had been weakening for months before his death, implying illness or injury. As it turns out, Brooks might have been seeking treatment for early onset Alzheimer’s, triggered by a head injury in a boating accident years before.

The Alzheimer’s treatment explains the condition of his bones, and the illness itself explains both the different handwriting (a dementia symptom) and the conflict with McKeon. (Brooks may have stolen McKeon’s puzzle unknowingly.)

This points back to Mrs. Brooks. It turns out she was publishing puzzles Brooks had previously created but deemed unusable. She had accidentally published McKeon’s puzzle. She mentions being broke, and not knowing what happened to hundreds of thousands of dollars that should’ve been in their bank accounts. 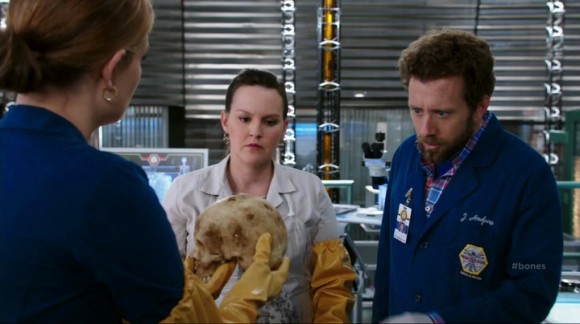 It appears that Brooks gambled his money away in online gambling. But when Booth and Aubrey lure out the bookie who broke Brooks’s fingers, the bookie says that Brooks was bankrolling a woman: his assistant, Alexis.

The assistant confesses to stealing from Brooks, but claims she would’ve paid him back. She is booked for theft, since they can’t yet prove she committed the murder.

The team discovers Brooks’s neck was broken, and doubts that the assistant could’ve done it.

Oddly enough, the solution appears while the team rallies around a pregnant coworker, Daisy, who solves the case during her pre-delivery contractions. She supposes that the blood sample they found with Brooks wasn’t his. It has to be that of a blood relative. 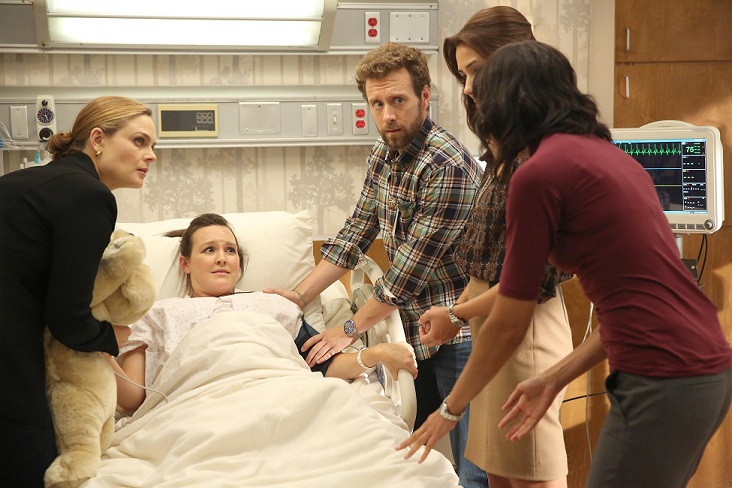 Brooks had a son. Which brings us back to Emory Stewart, who turns out to be Brooks’s son from a previous relationship. Emory talked to Brooks, but when they met in person later that day, Brooks claimed to have no idea who he was. Angry, and unaware that Alzheimer’s was behind Brooks’s faulty memory, Emory shoved Brooks down a hill, unintentionally killing him.

This episode goes against the standard crossword mystery convention of having a puzzle at the center of the murder. There’s no puzzle left behind by the killer, no cryptic clue scribbled onto a grid by the victim, no need for a detective with a knack for crosswords to crack the case. There’s simply a murder mystery and a bit of fun clue-fueled wordplay.

Sadly, we never return to the curiously unpleasant list of clues and words on Brooks’s cast, which was one of the most interesting plot points to me. Oh well. (There’s also the whole “wife knows husband has Alzheimer’s, but doesn’t report him missing” plot hole. But, hey, puzzles, not plot holes, right?) 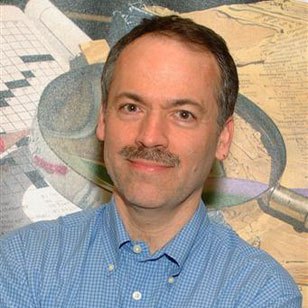 [Mr. Shortz, looking none too amused by the plot of this episode.]

This episode does raise an intriguing idea, though. Imagine a murder mystery dinner set at next year’s American Crossword Puzzle Tournament, where something dastardly had happened to Will Shortz. (Thankfully, we can lose the fracking pit and its acidic unpleasantness with this scenario.)

Who would YOU suspect had done the heinous deed? His equally ambitious and capable assistant? A wronged fellow constructor? Perhaps a jealous ping-pong rival? There’s a lot of possibility there.

Of course, considering how Puzzle #5 decimated the competition last year, perhaps Brendan Emmett Quigley would be a more likely target.